A group of 50 militants approached a marine base in Narathiwat's Bacho district early Wednesday to launch a surprise attack, unaware that they were entering a death zone.

Narathiwat Task Force 32 knew in advance of the planned attack on their base. Fifty marines led by Cdr Thammanoon Wanna, the task force commander, were poised for action.

"My men and I waited for days.

"Before they turned up, we spotted about eight men pointing night-vision telescopes at the base. Then we knew it was time," Cdr Thammanoon said.

The militants were divided into two groups - the attack group comprising 30 men, and the support team of 20.

As the base is next to a village with access via a road, the militants arrived in two pickup trucks.

Spikes were strewn on the road to stall military backup from arriving.

The insurgents launched their attack with guns and grenades. As they closed in on the base, explosives planted by the marines went off, killing and wounding some of the intruders.

Shooting then erupted and both sides exchanged heavy gunfire for about 20 minutes before the support team retreated. Two militants were killed as they were being pursued while 14 died during the attack on the base.

The map showed the attack target.

He said the hardest part of planning the counter-attack was to keep the preparations secret from villagers, as some of them might have been insurgent sympathisers. A source said those who took part in the defence of the base included 17 men who had completed SEAL training and 11 others who had passed the Recon programme.

According to the source, the loss of lives was unavoidable.

"They were heavily armed and came with tools of torture. We seized ropes, wire, sharp objects and some materials for setting a fire," said the source.

It is reported that Maroso Chantrawadee, a core rebel leader, managed to get past the obstacles to enter the base where he was shot and killed.

The militants wore military uniforms but had scarves on to set themselves apart from the real soldiers. (Continued after the photo...) 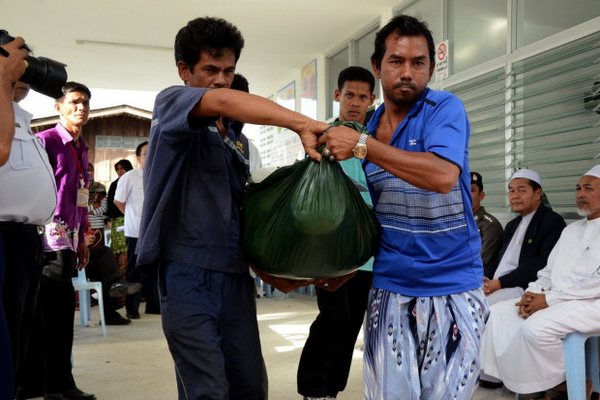 Families of the dead insurgents arrived on Wednesday to retrieve the bodies. Many said they had no idea the dead men were involved with the violent southern insurgency.

A military source said the insurgents had formed a so-called "Army of Pattani" to give themselves some self respect.

The source said the uniforms worn by the 16 militants killed in their attack on a military base in Narathiwat show the insurgents in the far South have formed a "Pattani army".

He said the uniforms mean southern insurgents have set up their own force, even though the militants wore uniforms used by Thai soldiers.

Uniforms boost their courage and morale making them feel they are soldiers of a Pattani army, said the source who is a unit commander in the area.

However, the insurgents have not yet established a permanent base there, he said.

If they set up a permanent base in the forest, it would be a stationary target for attack by state authorities, the source said.

Insurgents still mingle among residents. "They reveal themselves when they launch attacks and afterwards they return home," the source said.

Often, insurgents wear military uniforms in attacks on residents, a tactic to make people think the destruction was the work of state soldiers, he said.

"Some people like to wear military uniforms, but insurgents buy them and dress like soldiers to wage violence," ACM Sukumpol said.

ACM Sukumpol said the 16 dead militants were proof that insurgents in the far South pose as soldiers to attack locals to tarnish the reputation of soldiers.