The State Railway of Thailand's concept of a new high-end property project as a landmark for Bangkok in the Makkasan area is now looking bleak in the eyes of a group of relieved online social network users. 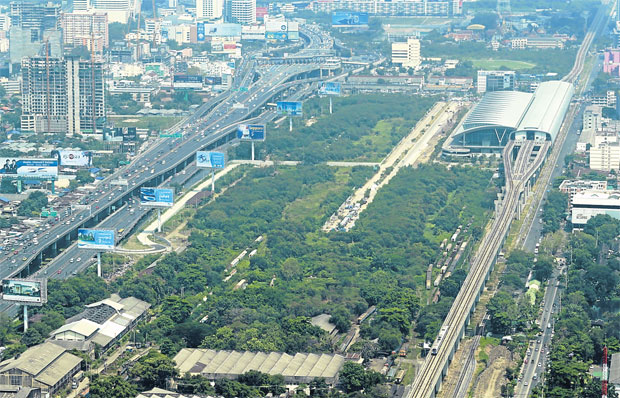 This bird’s-eye view shows a green tract of land in Bangkok’s Makkasan area. The State Railway of Thailand, the owner, wants to turn it into a high-end commercial complex, but city residents want it to become a public park. PATTARAPONG CHATPATTARASILL

These people are the first opponents to gather through an online campaign to protest the 200-billion-baht project which is aimed at building a new eye-catching tourist attraction as well as earning a lot of money for the SRT, which is struggling against huge debts.

Their protest is gaining momentum and so far about 9,100 people have signed their names on a website, Change.org, to back the campaign against the project.

Once the number of signatures reaches 10,000, the campaigners, who call themselves "We-Want-a Makkasan-Public-Park-and-Museum", will send a petition to the Transport Ministry calling on it to scrap the project.

As suggested by its name, the group's goal is to preserve the Makkasan area in its current state.

The area is a mix of a train maintenance factory, a large pond and a green area, which are considered the lungs of Bangkok.

A group supporter, Suwit Wongrujirawanich, disagrees with the SRT's money motive behind the project and, especially, its claim to want to build a new landmark for the capital.

"I want to ask what countries or cities use a luxurious condominium and a shopping mall as their landmarks," he said, pointing to well-known icons such as the Eiffel Tower in Paris and the Statue of Liberty in New York which have nothing to do with elegant residences or department stores featuring high-end products.

Mr Suwit's doubt reflects his concern over a plan to commercialise the Makkasan area. Under the SRT's initial development plan, the 500 rai of Makkasan will be divided into a commercial zone and a new road to solve traffic congestion in the area.

However, SRT governor Prapat Chongsanguan said, it does not mean the green area will disappear. The SRT will preserve part of the Makkasan area as a green zone.

Yet, looking at a picture of the area drawn by a private company wanting to bid for the project, another opponent, Chaibandit Peuchponsub, claimed he saw a single area allocated for a green zone. But there were only large buildings occupying the area, he said.

"The SRT's goal is to have a private firm commercialise the area, so it will go that way, thinking only of the returns in money," he said.

"It's hard to believe businesses will think of it in terms of the environment."

The group's co-leader, Jatuporn Tansirimas, said the supporters do not want to spark a new conflict in society, and only tell people what they think and what the government should do.

The government has already called for bids for the project, but so far it has been unable to find a suitable developer, according to Mr Jatuporn.

Now the SRT is drafting terms of reference to select new bidders. Mr Prapat expects the ToR will be finished no later than May in order to be forwarded to the transport minister for the final say.

The agency wants a single private company to carry out the project. It will be allowed to rent the area for more than 30 years.

"Bidding companies can freely suggest a development plan, but they are required to build a Bangkok landmark," Mr Prapat said. "A concept is that when people think of Bangkok, they think they must visit this place."

"We have to understand that the SRT has been plagued by debts. We need more revenues to reduce our burden," he said.

"It's unfair to always ask for money from the government."

However, the Makkasan opponents do not seem to be losing any momentum in their effort to stop the project from going ahead. Even the Bangkok Metropolitan Administration has asked the SRT to turn the Makkasan area into a new public park.

Mr Prapat said he does not know why the city wants the Makkasan area because it can ask other state agencies to grant areas for its green policy.

As for the protesters, they find it difficult to accept the fact that another "lung of Bangkok" will be turned into a commercial area.

One protester, Roongrot Ratanapichetkul, admitted parts of the Makkasan area have been left abandoned, but "if it is going to change into a luxury project, I would prefer leaving it untouched".