A marine private from the unit that killed 16 insurgents in Narathiwat's Bacho district in February was found shot dead after having been abducted by armed men on Monday night. 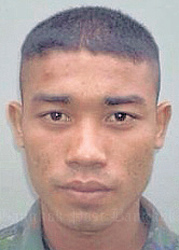 Authorities found the body of Pvt Ma-ila Tohlu, 24, near a mosque in Batu village of tambon Bacho of Bacho district in Narathiwat at 8.30pm last night.

Security officials said his head and body were riddled with bullet holes but there were no signs he had been tortured.

Witnesses saw insurgents kick the body out of a pickup truck.

Pvt Ma-ila had been abducted from his home in Rueso district.

The private, who had allegedly been a member of an insurgent group, is believed to have tipped off authorities about the February attack in which about 50 insurgents assaulted a marine outpost.

They arrived on a pickup truck at their house in tambon Suwaree about 7pm on Monday, she said.

Mrs Dareesa told police yesterday the men arrived at the house just after she left to buy food in her Moo 3 village. Her husband was in the house with her 20-year-old brother Yakareeya Sorpee.

Two men stood guard in front of the house while the other six went inside. One pointed an assault rifle at the head of her brother and demanded to know who the marine was.

They bound Pvt Ma-ila and took him away in their pickup truck.

Pvt Ma-ila, who is attached to the Chulabhorn Marine Camp in Narathiwat, was seconded to the 32nd Narathiwat unit based in Ban Yuelor village in tambon Bareh Tai of Bacho district in February.

Insurgents attacked the base on Feb 13, but the marines who had been tipped off about the attack repelled the assault, killing 16 of the militants.

Pvt Ma-ila had been on leave for six days and was spending his time off at home when he was abducted.

He had been reluctant to leave the house and earlier told his wife insurgents were out for revenge against marines from his unit.

She insisted her husband had no conflicts with anyone in the local community.

An intelligence source said the private was suspected by insurgents of having been the one who tipped off authorities about rebel movements ahead of their failed attack on Feb 13.

The private had allegedly been part of a militant network in the past and knew the movements of those who attacked the marine unit.

Meanwhile, two border patrol police were injured in an explosion on a road in Yarang district of Pattani province yesterday, police said.