An elegant cemetery in strife-torn southeast Myanmar has long stood as a lonely testament to the fate of thousands of prisoners of war who died building Japan's "Death Railway". 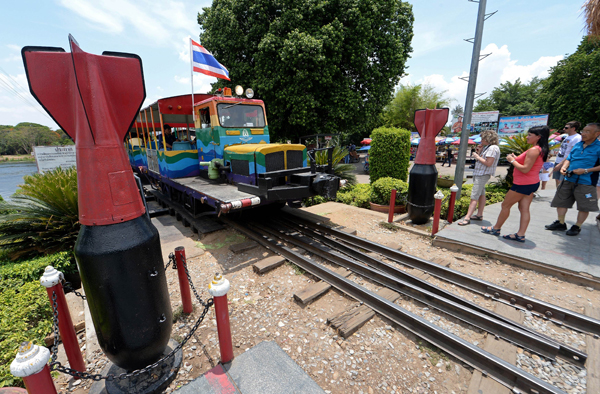 Visitors look at a tourist train as it crosses a railway bridge over the river Kwai, built during World War II, in Kanchanaburi. About 13,000 prisoners of war -- many captured in Singapore, the Malay Peninsula and what was then the Dutch East Indies -- died during construction of the railway, along with up to 100,000 civilians, mostly forced labour. (AFP Photo)

As the fast-changing nation now opens to the world, a reformist regime is considering rebuilding a stretch of the notorious World War II track to attract tourists and help develop border areas, where memories of the line have been eclipsed by conflict and poverty under decades of junta rule.

Local gardeners pluck weeds and tend flowers between neat lines of graves at the Thanbyuzayat War Cemetery in Mon state for some 3,000 Allied troops who died building the line between Myanmar and neighbouring Thailand.

"After seeing this cemetery people do not want to see war. There should not be war in the whole world," gardener Myat Soe told AFP.

"Because the soldiers died the way they did the world remembers them with sorrow. Dying fighting is honourable, but dying like this is very sad."

Many epitaphs at the site, funded by the Britain-based Commonwealth War Graves Commission, are a heart wrenching testament of how bewilderingly distant the country then called Burma was for the families of those killed.

"We were not there to clasp your hand, you passed away without a last good-bye," reads the epitaph for 26-year-old Lance Serjeant Harry Dawes, of the Loyal Regiment (North Lancashire), who died in September 1943.

Exhaustion, starvation, disease and torture were the chief causes of fatalities among those impelled by the invading Japanese to gouge a rail route through dense jungle and solid rock between October 1942 and December 1943. 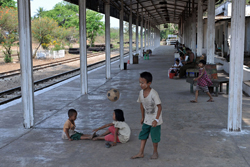 Children play at the railway station in Thanbyuzayat, in Myanmar's eastern Mon state. Weeds have swallowed much of the old railway track and a modest cemetery is a lonely testament to the thousands of prisoners of war and Asian workers forced to build the "Death Railway". But Myanmar's plan to reinvigorate the railway aims to transform the area. (AFP Photo)

About 13,000 prisoners of war -- many captured in Singapore, the Malay Peninsula and what was then the Dutch East Indies -- died during construction, along with up to 100,000 civilians, mostly forced labour from the region.

Robert Goodwin, an Australian veteran who worked on the infamous "Hellfire Pass" cutting on the Thai side of the border, said the men's relentless toil involved hacking through rock almost completely by hand.

"Every day that we worked, if anyone seemed to be slowing up they'd be belted with not just hands or pickaxes but with wire whips, with anything they could lay their hands on. The Japanese were cruel by anybody's standards."

On the Thai side, hordes of foreign visitors flock to see the track and bridge made famous by the film "The Bridge Over the River Kwai", and to ride on a stretch of the line still in operation.

The town of Kanchanaburi, a popular destination about three hours drive from the capital Bangkok, generated tourism revenue of over 2.4 billion baht last year, according to Thai officials.

That fact is not lost on Myanmar authorities keen to encourage development in the southeast of their country -- a region emerging from isolation after years of civil war.

Surveys have now begun to trace the route from Thanbyuzayat to Three Pagodas Pass at the Thai border, according to an official from Myanmar Railways, who asked not to be named.

"This is primarily for tourism. If we can connect the railway track on the Thai side, it will help tourism develop," he said.

Phyoe Wai Yar Zar, of the Myanmar Tourism Board, said there is "huge potential" to develop tourism around the "Death Railway" in Myanmar.

But he said efforts should not only be "focused on the past" and should also showcase the heritage of the local ethnic minority population.

"I believe we shouldn't invent the wheel again. What has been done in another part of the region shouldn't be done again in Myanmar," he said.

There are, however, doubts about the feasibility of restoring the railway.

Rebuilding the track would make "little economic sense" because a hydropower dam on the Thai side blocks the original route, according to Rod Beattie, a historian who runs Kanchanaburi's Thailand-Burma Railway Centre.

The 420 kilometre (260 mile) line linking the Thai and Myanmar railway systems was aimed at resupplying the Japanese army as it fought British colonial forces and their allies.

It fell into disuse after the war ended in 1945 and much of the track was reclaimed by the jungle.

Myanmar was soon embroiled with its own internal strife as independence in 1948 heralded civil wars in ethnic areas.

In Thanbyuzayat there is little sign of remembrance beyond the gates of the cemetery.

An old locomotive and a last scrap of track on the outskirts of town acts as a memorial, but the rails have been swallowed by weeds and a huddle of statues depicting emaciated prisoners has been vandalised, smashed almost beyond recognition.

The railway has become a legend for local children, a group of whom eagerly led a visiting AFP journalist through the shady corridors of a rubber plantation to proudly display an anonymous mound of earth they were convinced marked the old route.

Gardener Myat Soe is encouraging local youths to understand the history behind the cemetery and said a planned museum would also help raise awareness.

"As long as the world exists, this cemetery will be a symbol of a tragic time," he said.

He recalled a 90-year-old Australian veteran who made the difficult journey to the cemetery two years ago to visit the grave of a friend.

"As soon as he arrived, he put down his bag beside the grave, saluted and burst into tears. It was the saddest thing I had seen in the nine years I have worked here. I cried beside him."