BRN calls on military to back South dialogue

The head of the Barisan Revolusi Nasional (BRN) peace talks delegation has emphasised the need to ensure the success of the peace dialogue in the South but says there are groups from both sides who have different agendas. 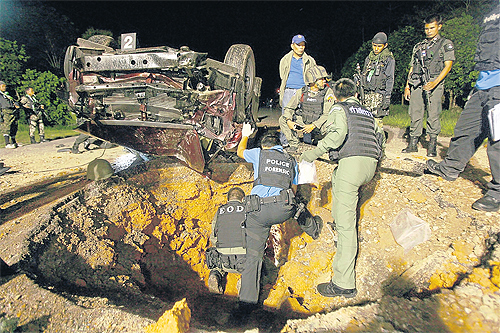 Police inspect a crater caused by a bomb attack on a police vehicle on a section of the Krong Pinang-Ban Luemu road in Yala's Krong Pinang district. The blast killed one policeman and injured seven others. (Photo by Muhammad Ayub Pathan)

A 38-minute discussion in Bahasa Malaysia between the Malaysian leader of the BRN, Hassan Taib, and a former Narathiwat candidate from the New Aspiration Party, A-Sae Tohramae, was aired on Tuesday night on Pattani-based radio station Media Selatan.

The programme could be heard in the three southernmost provinces of Yala, Pattani and Narathiwat.

The broadcast was Mr Hassan's first interview carried by Thai media about the peace dialogue that was launched in February in the Malaysian capital. 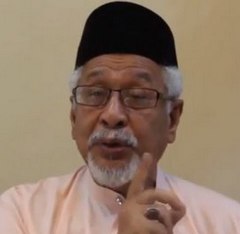 According to an informal translation by a Thai intelligence agency, Mr Hassan said the last round of talks went well and his Thai counterparts seemed to have a better understanding of the issue.

Mr Hassan said the government remains centred on the BRN's five proposals and has not moved to other issues.

He said that although the government is engaged in the peace talks, other groups in society are opposed to it, namely the military and the opposition Democrat Party.

He asked that all sectors in Thailand consider the peace dialogue as a national agenda item.

Mr Hassan said he would try to reduce the number of violent incidents but insisted this does not mean all the attacks will stop.

Stopping the attacks depends on the higher council (known as the Dewan Penilian Party or DPP).

He said the BRN's response to requests from the government side will be presented by Wednesday.

Mr Hassan said announcing that attacks would be reduced immediately was not possible.

He said the BRN has worked for a long time with other groups such as the Pattani United Liberation Organisation (Pulo) and Barisan Islam Pembangunan Pattani (Bipp).

He said there was a Pulo representative (known as Lukman bin Lima) in the BRN delegation to the talks as well, but Bipp, which also supported the process, had no representatives yet.

He also said that the BRN wanted Malaysia to be a coordinator and mediator because they were ethnic Malay people and have a better understanding of the problem than other countries.

On the rights of ethnic Malay people in Thailand, Mr Hassan said the BRN will consider a special administration zone or autonomy that fits them.

But the final goal of the BRN remains independence regarding freedom of education, economic affairs, social and religious ways of life, he said.

As Mr Hassan was speaking, the violence in the far South continued.

In Pattani on Tuesday night, a police officer was killed by a bomb explosion on a road in Yala and a ranger was shot dead in an ambush.

Police and a military bomb disposal unit rushed to the scene but found that their way was obstructed by nail spikes and burning car tyres scattered across the road.

They cleared the road and on arriving at the scene found eight police had been injured by the bomb, which destroyed their truck.

A highly unusual claim of South-linked violence outside the region was a "confession" by Idris Sapator (above) that he set off the Ramkhamhaeng Road bomb last month, and a motorcycle bomb in Narathiwat last August. Full story at this link.