More than 300 suspected insurgents turned themselves in to authorities over the past year, according to the latest report on the southern unrest. 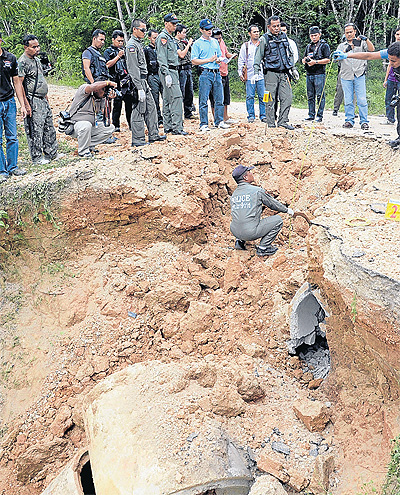 Police inspect a crater caused by a bomb blast targeting defence volunteers as they drove along a road in tambon Sako in Narathiwat’s Si Sakhon district to help colleagues ambushed by insurgents. Five defence volunteers were injured in the explosion. WAEDAO HARAI

"Because of our attempts to build their trust in the officers, the suspects, who were believed to have left home to join separatist groups in Muslim-dominated provinces, have decided to report to the government," defence spokesman Thanathip Sawangsaeng said yesterday.

The campaign was carried out between July 11 last year and June 27 this year, with 318 suspects surrendering.

Among those who turned themselves in, 171 were wanted under the emergency decree and criminal law, he said. Those who participated in the campaign would join a rehabilitation training programme. Those involved in criminal cases would face court trials with the armed forces providing legal assistance, verifying that they had changed their minds.

Col Thanathip also provided figures on the number of violent cases in the nine years since the insurgency broke out in 2004.

The authorities will go on curbing violence in the far South and, with the recent cabinet reshuffle of top security posts, Col Thanathip is hopeful of more efficient operations in coping with long-running security problems.

In a further development, the armed forces in cooperation with related agencies rehabilitated at least 3,000 rai of rice fields damaged in the southern violence.

In Col Thanathip's view, it does not matter who oversees security affairs as long as they are capable and equipped with solid experience.

However, the government has not been forthcoming about who will succeed Labour Minister Chalerm Yubamrung, former director of the Centre for Implementation of Policies and Strategies for Solving Problems in the Far South.

Ms Yingluck recently asked Yutthasak Sasiprapa, who was appointed deputy defence minster, if he could take over.

"I am ready to work," Gen Yutthasak said yesterday. "I also told the army chief I want to accompany his team to the far South as usual."

The two rangers, identified as Kampanart Khonto and Muhammad Hanapi Yunu, were shot dead yesterday afternoon in an ambush by suspected militants when they were on a motorcycle patrol in tambon Pulakong.

The volunteers were attacked as they responded to an earlier blast.

No one was hurt by the first bomb but the attackers detonated a second device buried under the road. The five defence volunteers were seriously wounded and their vehicle was badly damaged.

In tambon Kor Saba of Thepha district in Songkhla province, Samsudee Lateh, 62, who was said to be former member of the Patani United Liberation Organisation was killed in a drive-by shooting yesterday afternoon as he left a mosque.

In Narathiwat province's Muang district, a makeshift cardboard sign bearing a handwritten message telling soldiers to get out of the three southernmost provinces was found hung on a road sign.

Blaming the soldiers for causing insurgents to retaliate with violence, the message demanded that soldiers leave the region immediately.

The sign was later removed by a bomb disposal officer.

He said army chief Gen Prayuth Chan-ocha and supreme commander Gen Tanasak Patimapragorn will stay on after the military reshuffle later this year.