Army will not dump grounded airship

The army has no plan to sell its airship grounded at an airport in Pattani and is looking for a firm to fix its problems, deputy army spokesman Winthai Suwaree said on Thursday. 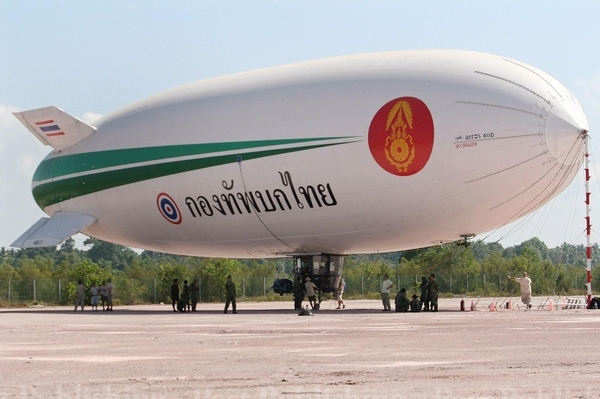 Soldiers and US technicians set up a surveillance airship at a military barracks in Pattani province on March 5, 2010. The military purchased the 350-million-baht surveillance airship to help restore peace in the three troubled Muslim dominated provinces amid questions that it could be another waste of state funds. (EPA file photo)

Col Winthai dismissed speculation that the airship at Bor Thong airport in Nong Chik district of the southern province will be "relieved of duty". It is in the process of repair after an accident on Dec 13 last year, he said.

The speculation emerged from the "This Is Thai PBS" programme which reported that the army planned to decommission it. It is widely interpreted that the future of the airship is over.

The deputy spokesman denied the report, saying that the airship will be neither sold nor taken out of service for good.

An army source said the Internal Security Operations Command had approached the army's Transport Department to call an auction for a firm to repair the airship, which has damage estimated at about 50 million baht.

The airship crashed at Bor Thong on Dec 13 last year while it was travelling to form part of the protection for Prime Minister Yingluck Shinawatra, who was in the southern border region to cheer up teachers being targeted by militants. It has been folded since then and its damage includes propellers and the control room.

The airship was purchased in 2009, when Gen Anupong Paojinda was the army chief, through an emergency process proposed by Isoc for security surveillance in the violence-prone region.

The airship has been mostly off duty ever since due to its problems and high mantenance costs.

Present army leader Gen Prayuth Chan-ocha has mooted the idea to transfer it from Isoc to the army but the latter is reluctant to take over responsibility.

The source said many army officers wanted to scrap it after spending 50 million baht for repairs and another 30 million baht a year for maintenance. Most of the cost is for expensive helium gas and the per-diems for 80 soldiers working on the airship.

The airship was supplied by Aria International Incorporated, which bought it from Wordwide Aeros Corp and then sold to the army.