Fourteen injured passengers were sent to hospital and of them 12 have now been discharged.

Videos like this one, uploaded almost instantly to YouTube, illustrate complaints by 40 injured passengers and others that Thai Airways International responded slowly and poorly to the Sunday night incident.

They said no one from the airline had informed them of how the company would reimburse their medical fees.

They also claimed a lack of communication immediately after the accident, saying they were left abandoned.

Former Bangkok governor candidate Kosit Suvinitjit was travelling in business class on THAI flight TG679 from Guangzhou, China, which veered off the runway on landing at Suvarnabhumi after an apparent landing gear malfunction. He did not join the complainants Monday, but said ground staff performed poorly. 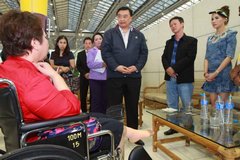 "I would have liked to have seen more ground staff helping passengers," he said. "There should have been interpreters in several languages to inform passengers of the situation, as many were tourists."

Mr Kosit said passengers were taken from the accident scene to immigration counters, but some of the passengers had fled the aircraft without their passports, causing confusion.

However, Mr Kosit praised the efforts of the pilots and cabin crew, saying they controlled the situation well. He also thanked the airport's emergency response staff, including firefighters, for reaching the stricken aircraft swiftly. Passenger Panuwat Phanvichartkul said after leaving the plane, travellers were marshalled to shuttle buses.

However, the buses remained stationary with passengers locked inside unattended for 20 minutes, he said.

"The buses were packed with passengers, including those who were injured and in a state of extreme shock," Mr Panuwat said. "They needed officials to take care of them and provide them with first aid, but there was no one.

"At the terminal, no staff members were there to receive passengers. There was not even a glass of water to drink."

Wijit Khaoto, another passenger, said the lower end of the emergency slide he used did not reach the runway surface.

This caused difficulty for shorter passengers whose feet could not touch the ground from the end of the slide. Some passengers trapped at the bottom, including himself, were struck in the back by those coming down the slide after them, he said.

"No staff members were there to help. The passengers who jumped on the slide had to turn back to help pull other passengers down," he said.

The THAI president denied allegations by some passengers that cabin crew members left the plane before assisting passengers.

Mr Sorajak said all passengers disembarked using four inflatable emergency slides on the left side of the aircraft.

Under evacuation procedures, one crew member must exit through each slide first to catch following passengers, while the other crew members must remain aboard to direct evacuees.

There are numerous videos such as these at YouTube and other social media.