The Criminal Court on Wednesday sent Lebanese-Swedish man Atris Hussein, believed to be linked to the Hezbollah militant group, to prison for two years and eight months after finding him guilty on charges of illegally possessing restricted chemical substances. 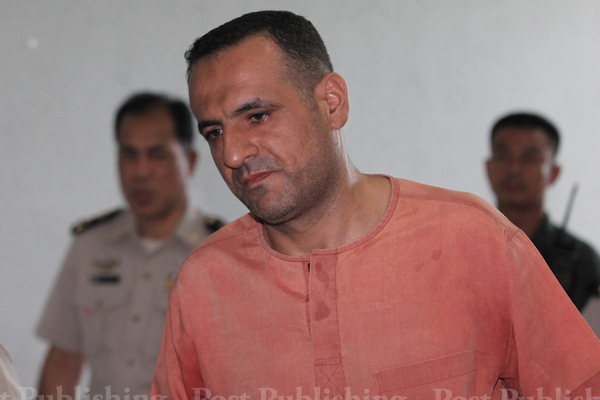 Atris Hussein at the Criminal Court in Bangkok on Wednesday, Sept  18, 2013, for sentencing on a charge of illegal possession of a restricted chemical substance - 2.8 tonnes of ammonia-urea based fertiliser used in bomb making. Photo by Pattanapong Hirunard

Hussein was arraigned in the Criminal Court on Feb 29 last year for violating the weapons control law after police seized nearly 2.8 tonnes of ammonium nitrate and urea-based fertiliser from houses he rented in Samut Sakhon on Jan 16, 2012.

The chemicals, which are widely used in the agricultural sector, can be used to make bombs.

The court initially sentenced him to four years imprisonment. The jail term was reduced to two years and eight months because he gave useful testimony.