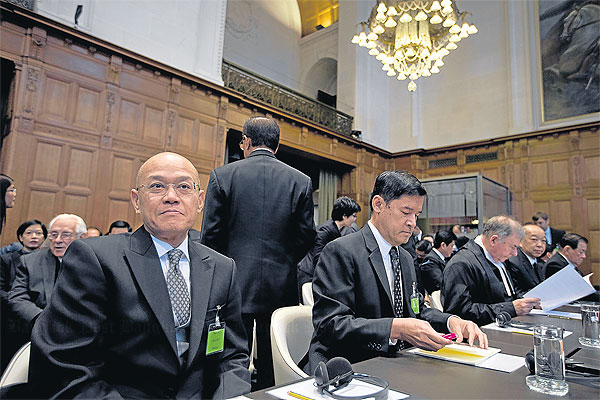 From left, ambassador to the Netherlands Virachai Plasai, Voradet Viravakin, directorgeneral of the Department of Treaties and Legal Affairs, Prof Alain Pellet of France, and Foreign Minister Surapong Tovichakchaikul, wait for the World Court to deliver its verdict in The Hague, the Netherlands, yesterday. APPHOTO/ PETERDEJONG

The groups were the Anti-Thaksin Coalition comprising civic groups in all 77 provinces, the People's Democratic Force to Overthrow Thaksinism, and the Dharma Army.

They travelled from the Jor Por Ror Intersection to the Defence Ministry to demonstrate their intention to reject the ICJ ruling, no matter what it was.

Letters addressed to Prime Minister and Defence Minister Yingluck Shinawatra and army chief Gen Prayuth Chan-ocha were handed to representatives of the three. The letters stated the groups will not accept the ICJ's ruling.

Meanwhile, former People's Alliance for Democracy (PAD) leader Chamlong Srimuang said yesterday that he would not accept the ICJ ruling and was ready to join the rally to oppose it.

Maj Gen Chamlong said parliament's amendment of Section 190 of the charter is highly suspicious since it allows the government to shortcut decisions on international treaties by no longer having to seek parliamentary approval for them.

He said the end of the PAD saw new protest groups emerge and brought more people out to join the protests. Sondhi Limthongkul, another ex-PAD leader, said he supports all anti-government groups, including the Democrats.

"Every government favours politicians' interests rather than those of the people. Since a House dissolution is not the solution, I want the country to be reformed," he said.

"We must get rid of all politicians and ban them for a few years. Power should be handed to the King," he said.