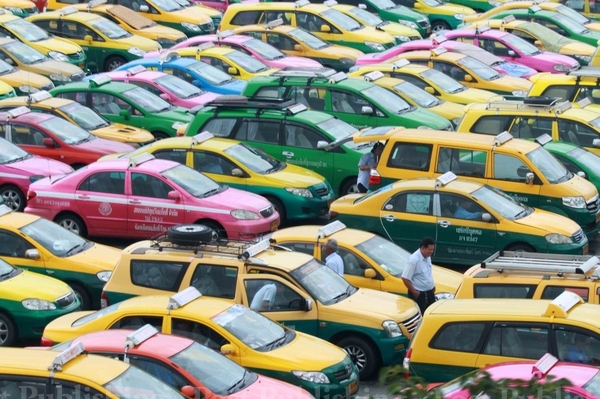 Taxis are waiting for their queue at Suvarnabhumi airport. (Bangkok Post file photo)

Airport director Rawewan Netrakavesna said turnstiles have been put in place since Nov 1 to block inbound air passengers from catching taxis on the departures floor.

The measure is aimed at relieving traffic congestion in the departures area drop-off zone, situated on the airport's fourth floor.

The measure was implemented in response to reports that many taxi drivers who were dropping off passengers at the departures area would wait there in an attempt to pick up another fare.

Those taxi drivers also posed a safety risk to passengers because airport authorities did not have their licence details, she added.

Reports had also emerged of overcharging, refusal to use meters, and various crimes committed against passengers by some of these taxi drivers, the airport director said.

The newly installed turnstiles on the fourth floor only allow people to enter the airport's passenger terminal, and force inbound passengers to catch taxis from the first floor only.

On this floor, only taxi drivers who are registered with AoT are allowed to operate.

Passengers who use these registered taxis are subject to a surcharge of 50 baht on top of the regular fare, and are handed a receipt with the driver's details in case a complaint needs to be made.

AoT allows only taxis that have been in use for no longer than two years to collect passengers on the first-floor ramp.

The system will also enable passengers to log in their destinations and their preferred taxi size.

Transport Minister Chadchart Sittipunt said the new turnstile measure had increased the number of taxi trips departing from the first-floor ramp from 6,000 to 9,000 per day. He said this figure proved that the new system was effective.