The Central Administrative Court has ruled that an arbitration committee lacked the authority to award a multi-million baht compensation package to the contractors behind the terminated Hopewell elevated rail project. 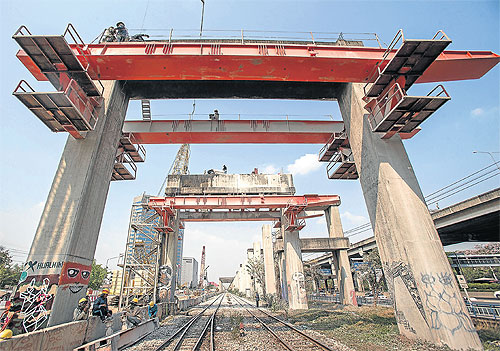 Workers are busy dismantling the abandoned Hopewell pillars to clear the way for construction of the Red Line mass transit rail project, running from Bang Sue to Rangsit. PATTARAPONG CHATPATTARASILL

The arbitration panel ordered in 2008 that the State Railway of Thailand (SRT) and Transport Ministry pay 59 million baht, plus 7.5% interest per year, to Hong Kong-based Hopewell (Thailand) as compensation for what it said was the unfair termination of the concession.

The company had been awarded a 30-year concession to build and operate a 60km elevated railway, as well as a tollway and frontage roads.

The SRT and Transport Ministry appealed against the ruling to the Central Administrative Court, which ruled yesterday that the deadline to lodge petitions with the arbitration committee was within five years of the contract’s cancellation, or by Jan 30, 2003.

The court said the arbitration committee therefore had no authority to accept the case.

It ordered the scrapping of two rulings in favour of Hopewell by the arbitration panel on the grounds that they were in violation of Section 40 of the Arbitration Committee Act.

The panel’s first ruling was made on Sept 30, 2008 and required the SRT to pay compensation to Hopewell. The second ruling was delivered on Oct 15 the same year and rejected the SRT’s request to terminate what the state agency said was an unfair contract with the construction firm.

The two sides can appeal against yesterday’s ruling with the Supreme Administrative Court within 30 days.

Transport and railway authorities expressed relief after the ruling, but believed Hopewell would prepare for another legal fight.

The ruling came as a surprise to public prosecutors representing the SRT, who earlier expressed concern they would lose because of the commitment to the contract.

The contract to build the Hopewell project was signed on Nov 9, 1990, when the late Montri Pongpanit was transport minister under the Chatichai Choonhavan government.

Seven years later, the cabinet of former prime minister Gen Chavalit Yongchaiyudh announced it would scrap the contract after the company halted construction in 1997 amid the financial crash.

The contract was officially terminated on Jan 27 the following year by the Chuan Leekpai government, for which Suthep Thaugsuban was transport minister.

This legal victory is similar to that of the legal conflict between the Expressway and Rapid Transit Authority and BBCD Joint Venture, contractor of the Bang Na-Bang Pakong expressway project, deputy permanent for Soithip Traisut said.