CHON BURI - A bomb scooped up by a fishing net in a pond in Phanat Nikhom district has led to the discovery of over 80 others and more than 500 bullets on Thursday.

Police were informed about the bomb on Thursday morning, but the first bomb was collected by Praset Chumchan on Wednesday night when he tried to catch fish in the 4-rai Pond 54 in tambon Sa Si Liem of Phanat Nikom district. He informed assistant village headman who reported it to the police.

The police and an explosive ordnance disposal (EOD) unit went to inspect the scene where around 100 people had gathered to watch. Police barred them from the area.

In the morning a total of 21 mortar rounds were found in shallow water.

Later in the afternoon, the police, with the assistance of divers, retrieved a total of 81 bombs, 552 bullets and an AK47 assault rifle.

The mortar bombs found in the morning seem to be produced in Thailand as initial examination showed all had codes in Thai. However, those found later in the day, both 82mm and 61mm size, were likely to have been produced by countries such as the US.

Police estimated the weapons cache might have been dumped there about two weeks ago.

An expert in munitions suspected the cache would have been sold to people along the border for self defence, not for the political protests as the mortars are for stand-off, long-range use. 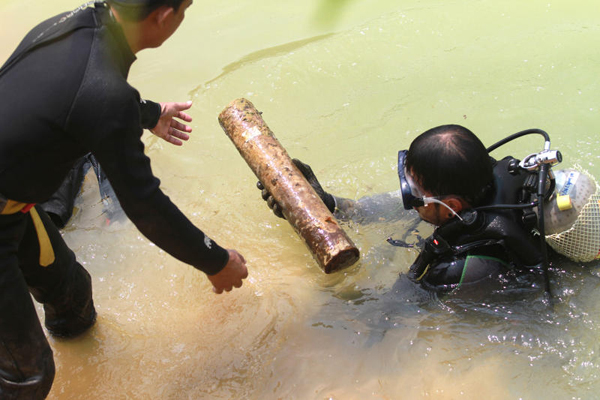 A diver hands a bomb he takes up from under the water to another man. 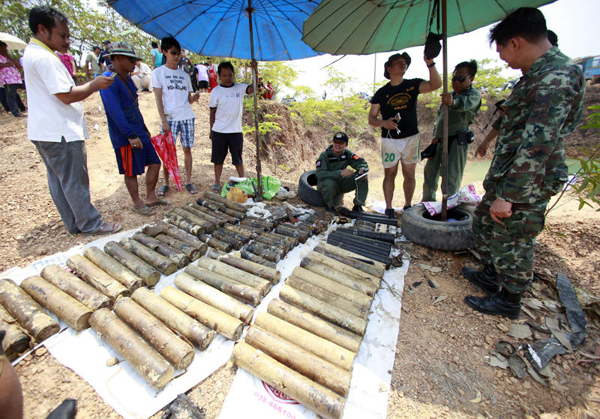 The police display bombs taken up from the water. (Video and photos by Thananrak Khoonton)