Getting a driver's licence for private and public vehicles will be more difficult from June 1, when the Land Transport Department introduces a tougher examination. 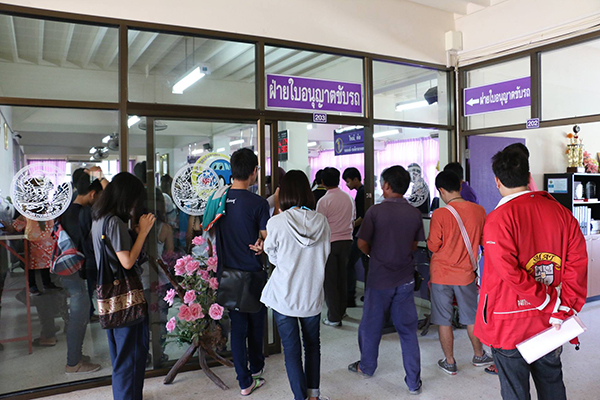 Applicants for a driving licence flock the Land Transport office in Muang district of Phitsanulok before a new test is enforced on June 1. (Photo by Chinnawat Singha)

Applicants for a licence today sit in a room to take a multiple-choice test of 30 questions. They can move to the next step after they get 23, or 75% of all questions, correctly. Each test comprises randomly selected questions from a pool of 300 already posted online for applicants to prepare themselves.

But they will see 50 questions starting from June 1 and have room for only five incorrect answers as the department requires a 90% accuracy. The questions will be taken from a pool of 1,000 questions instead of 300 today.

The new rules apply to both applicants for private and public vehicles.

Applicants are also required to attend another class on traffic rules before moving to the last step of driving tests.

The Transport Ministry, which oversees the department, said the change would make motorists more aware of traffic rules, especially among those behind the wheel of public transport such as buses and taxis.

''Most accidents occurred because drivers ignored traffic rules despite the presence of signs. That's why the Transport Department has to change the procedure,'' he said.

Police recorded 60,000 accidents in last fiscal year ending September 2013, according to figures of the National Police Office. Motorcycles topped the list with 20,239 accidents, followed by cars with 16,664 and trucks with 9,560. Total damages were 699 million baht.

Taxi and truck operators have cried foul over the change, saying the new test is ''too strict'' and could affect their business.

But Gen Prin said only those knowing traffic rules deserved to sit behind the wheel of public transport.

''The country has ignored this problem for so long. It's time we took the rules seriously,'' he added.

Background checks will also be conducted on public transport applicants, who complained about the time-consuming process which could take up to two months.

Tougher tests have made many Land Transport offices busier now as driver hopefuls wanted to avoid taking up a more difficult exam next month.

The Land Transport office in Phitsanulok saw the number of applicants double from 50 a day. They had to reserve seats days in advance instead of coming to the office and take the the exam right away.

Boonlun Janduangta, an official at the office, said most applicants were new drivers wanting to get a licence before the end of this month.

Another plan is in the pipeline for the department. The duration of the traffic rules class may be tripled to 12 hours in the future. Attendance is another requirement for those hoping to get a licence.

The department sets 18 years as the minimum age for the applicants, with that for public transport higher.