Taxi queues at Suvarnabhumi airport will be computerised within a month to end mafia control of cab operations, chief of the 11th Military Circle Maj Gen Nirundorn Samutsakorn said on Wednesday. 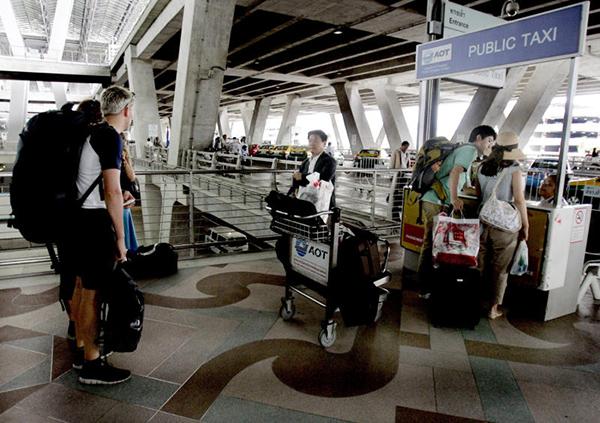 Cabs will also be able to pick up passengers at the departure level on the fourth floor, but not park there.

The reforms are part of the efforts by the National Council for Peace and Order (NCPO) to improve public transport systems.

Maj Gen Nirundorn said the army felt that the first priority in taxi management should be at the airport, for the sake of the country’s image and to prevent problems such as passengers left stranded on the road, over-charging and drivers acting improperly.

Airport taxis and drivers would be required to register in a computer system at the airport, then the cab queues would be managed by a card system. All drivers would have to accept that the passengers they get, and the destination, would depend on the luck of the draw.

Taxi queue management at the airport had become a long-term problem. Most drivers wanted passengers going a long distance, for instance to Pattaya or Hua Hin when the fare would be 2,000-3,000 baht a trip. But these drivers also had to pay someone to select passengers for them, he said.

Under the new computerised system, drivers accepting short-distance passengers would be allowed more frequent access to the queue.

“It is expected that the mafia system will disappear, as there will be no need for someone to screen passengers for the taxis.

"I would say that we will be seeking their cooperation, but if they do not cooperate some soldiers may be stationed at the taxi queue counter,” he said.

Maj Gen Nirundorn said there were two groups of taxis at Suvarnbhumi airport. The first group is registered and picks up passengers at the arrival hall. There were around 7,000 taxis under this system and about 3,000 of them regularly pick up passengers and they get an average of two trips each day.

He said it was necessary to take care of the well-being of the drivers, who usually pay about 700 baht to rent their cabs and must pay for fuel. Drivers should get at least 1,700 baht a day in total earnings to meet expenses and living costs.

The second group is taxis in Bangkok and neighouring provinces that drop off passengers at the airport. There are about 110,000 taxis, around 70,000 of them operated by 130 taxi cooperatives and 13 radio taxi operators.

Maj Gen Niturndorn said there would be no more mafia chasing taxis away on the fourth floor. Cab drivers would have to depend on luck, whether they can pick up passengers or not, after dropping off outbound travellers. If no passenger flags them down, they will have to depart.

He said passengers will have to continue paying the 50-baht fee for getting a taxi from the airport queue. However cab drivers want the army to increase the charge, which has not been changed for a decade.

For now, at least, the NCPO's policy is keep the charge at 50 baht.

The army will discuss all issues with the Department of Land Transport and later invite taxi cooperatives to discuss possible solutions for better management of services, which may include locations such as Don Mueang airport, he said.

Push to clean up pavements

High-value industrial products with few imported raw materials are expected to be the hardest hit as baht strengthens.