The State Railway of Thailand (SRT) will ask the junta for an additional 8 billion baht to fund design changes to its Red Line electric train project. 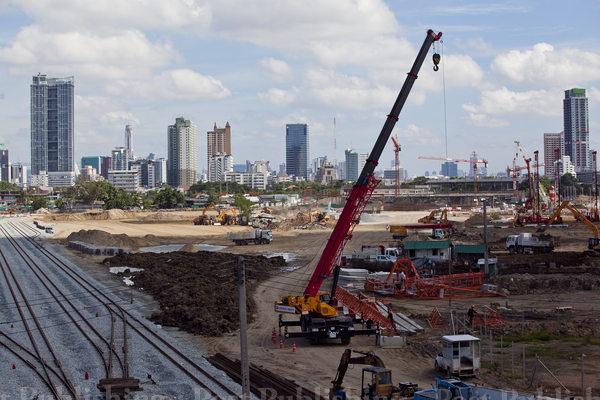 The state railway operator intends to amend the Bang Sue-Rangsit rail project and make it a four-track line instead of the three-track one originally planned.

The proposed change would result in adjustments in track and station structure designs, which would add 8 billion baht to the price tag, SRT governor Prapas Chongsanguan said yesterday.

With four tracks, two will be designated for use by electric trains only while the other two will handle regular trains, Mr Prapas said.

The current three-track design means both types of trains would share the tracks.

Adding a fourth track after construction of the 26.3-kilometre rail line is complete would be complicated and costly, the governor said.

The companies which won the construction work for the Red Line project have completed some parts of their contracts and were waiting for a final decision on adding the extra track, Mr Prapas said.

A decision was expected late last year but the matter was left in limbo after the House of Representatives was dissolved, he said.

The proposal was put on hold pending a decision by a new government.

A decision is needed soon because the electric rail scheme is an urgent SRT project, Mr Prapas added.

The Red Line starts from the current Bang Sue station, runs alongside the north-bound regular train line, and ends at Rangsit station.

About 19.2 km of the track will be elevated, while the rest will be at ground level.

Construction of the Red Line route is split into three contracts. The first was awarded to SU Joint Venture to construct the train station buildings and the train maintenance facility at a total cost of 29.8 billion baht.

The second contract was awarded to Italian-Thai Development Plc to construct and lay rail tracks from Bang Sue to Rangsit at a cost of 21.2 billion baht.

The third contract to install the electrical and mechanical systems and to procure electric trains is still to be awarded, pending an auction.