Bang-Pa-in phase could start next year

The Department of Highways will push for a project to construct the Bang Pa-in-Nakhon Ratchasima motorway to be included in the eight-year strategic infrastructure development plans initiated by the junta, a department source said. 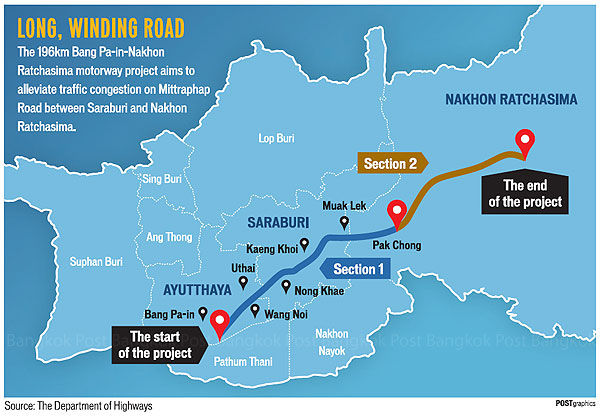 The inter-provincial motorway would ease traffic congestion on Mittraphap Road leading to the Northeast, as well as distributing wealth throughout the region.

The motorway is also intended to be part of the Asean Highway Network to accommodate the integration of the Asean Community.

The project was originally part of the 2-trillion-baht borrowing bill for infrastructure investment initiated by the previous Yingluck government, but was ruled unconstitutional in March.

The National Council for Peace and Order has ordered a review of several projects under the 2-trillion-baht loan scheme.

Some projects have been shelved, such as the 800-billion-baht high-speed train, while others, such as three electric train lines in Greater Bangkok, motorways and a dual-track railway have been retained and are set to proceed under the eight-year plan in the 2015 fiscal year, starting in October.

The new infrastructure projects are likely to tap into the fiscal budget, borrowing and public-private partnerships (PPPs).

Costs relating to land expropriation compensation will be funded by the 2015-2016 budget, while construction costs of 77.97 billion baht may be funded through loans or through a joint public-private venture, the source said.

The four-lane motorway will run from Bang Pa-in district of Ayutthaya, through Saraburi to Nakhon Ratchasima, covering 196 kilometres.

Construction of the first phase will cover Bang Pa-in and Pak Chong district of Nakhon Ratchasima, starting next year until 2017.

The second-phase project will cover Pak Chong to downtown Nakhon Ratchasima, between 2016 and 2018.

On Feb 5 last year, the cabinet of the previous government approved a royal decree for expropriation of land covering 12 districts in Ayutthaya, Saraburi and Nakhon Ratchasima for the project.

About 3,200 land plots will be expropriated.

Of them, a total 1,458 land plots in Saraburi make up the largest portion of plots subject to expropriation, the source said.

The source said the inter-provincial motorway project is significant as it will form a new network of motorways linking Bangkok to Nakhon Ratchasima, the gateway to the Northeast, and also feed into regional trade routes.

The new motorway will help ease traffic congestion along the key route to the Northeast, the source said, adding the inter-provincial motorway will be constructed according to high safety standards to ensure safe travel for motorists.

The source said air force chief ACM Prajin Juntong, who is charge of economic affairs for the NCPO, will meet state agencies to discuss details of the project shortly.

Meanwhile, a source at the Expressway Authority of Thailand (Exat) said the Exat will pay only 1.56 billion baht in compensation to the State Railway of Thailand (SRT) for expropriation of the SRT's land plots for construction of the related Si-Rat Outer Ring Road expressway project, covering 16.7 kilometres.

However, the source said Exat had studied the law and found there were no suggestions it should comply with the SRT's demands.

Exat had negotiated with the SRT for a ''realistic'' amount of compensation.

The source said the the planned expressway route overlapped with the high-speed train project between Bangkok and Hua Hin so its design had to be changed.

However, SRT governor Prapas Chongsanguan said he needed to study the details of compensation offered by the Exat in more depth before deciding whether the offer is acceptable.