A convicted murderer who changed his name after being released from jail was yesterday turned down by the Thai Bar Association despite his obtaining a law degree while in prison. 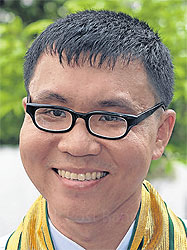 Chaiya: Mutilated his girlfriend in fit of rage

Supreme Court president Direk Ingkhaninant, the bar association chairman, said its executive board decided unanimously to reject the application of Chaiya Tanthakhanont, formerly known as Serm Sakhonrat, to become a member of the bar.

Chaiya was among hundreds of law graduates who applied for membership of the Thai Bar Association. Membership provides them with the opportunity to receive legal training so they can pursue a career as a prosecutor or judge.

The refusal to accept him as a member effectively means Chaiya cannot become a judge or a prosecutor.

Mr Direk said the rejection by the board is based on the fact that Chaiya, or Serm, was a convicted murder.

He was sentenced to life in prison in March 1998 for shooting dead and mutilating his girlfriend Jenjira Ployangunsri in what he said was a fit of jealousy because she wanted to end their relationship. Both were medical students at the time.

His sentence was reduced several times and he was finally released after serving 13 years and nine months in 2011. While in jail he studied law and received a bachelor’s degree from Sukhothai Thammathirat Open University in 2009.

Chaiya has reportedly applied for a licence to practise law with the Lawyers Council of Thailand. The application is under review pending exams that Chaiya must pass, Mr Direk said.

However, Dejudom Krairit, president of the Lawyers Council of Thailand, said yesterday the council will not issue a licence to Chaiya even if he were to pass the exam.

He said it is the council’s policy not to issue a licence to any person convicted on murder or drug charges.

Practising law is a respected career and a lawyer must have society’s trust, Mr Dejudom said.

A licence to practise will only be issued to people who are members of the Thai Bar Association for at least a year, he added.

Chaiya is regarded as highly intelligent. He enrolled in Chulalongkorn University’s faculty of engineering when he was just 15. And when he graduated at 19, he enrolled at the medical faculty at Mahidol University.