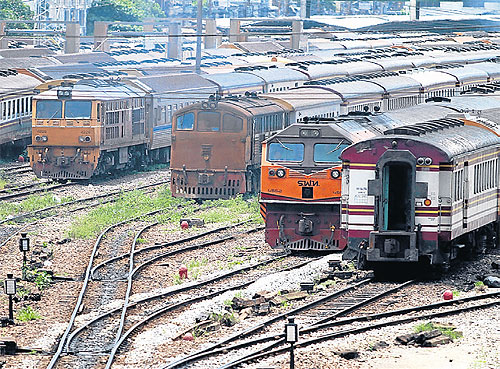 A file photo shows trains at Hua Lamphong station that ground to a halt after the automatic track control system malfunctioned. Railway development is a key part of the military’s transport infrastructure reforms. Thanarak Khunton

The plan, approved last week by the National Council for Peace and Order (NCPO), is set to be implemented in 2015-2022. But it differs little from the blueprint drawn up by the ousted Pheu Thai administration.

The only notable change is the plan has been extended to cover a period of eight years instead of seven. The emphasis has also been switched away from high-speed railways and onto dual-track services, with new 1.435-metre wide tracks capable of accommodating trains at speeds of 160km per hour being planned on two routes.

Soithip Traisuth, permanent secretary for transport, conceded the plan is similar to that proposed by the previous administration, arguing that projects have been kept intact because they are significant to the country's development.

"The NCPO's strategic plan and projects under the two-trillion-baht borrowing bill include the same details," Ms Soithip said. "Most of the projects are necessary and have been planned for some time, so they were compiled into the NPCO plan."

The NPCO has outlined five targets for infrastructure development. It wants to revamp the provincial rail network, improve public transport systems to ease traffic congestion in Bangkok, boost the capacity of highways to connect with production bases in rural areas and neighbouring countries, and improve the efficiency of water and air transport systems.

"Thailand has an advantage in its location, because transport in the region must pass through the country, making us the transport and logistic hub both for cargo and people," Ms Soithip said.

Thailand's competitiveness will be increased because the planned infrastructure development will help cut transport costs while linking the kingdom with other countries in the region, she said.

Under the NPCO's plan, five dual-track railways will be built on the same routes planned by the previous government.

The NPCO has added only one new route, which is a 90km stretch between Hua Hin and Prachuap Khiri Khan and will cost 9 billion baht.

After the rail construction work is completed, the capacity of Thai rail services is expected to increase from 228 trips per day to 800.

Rail services account for 1.4% of the country's transport while services on water make up 10.2%.

The previous government's four high-speed railways projects would have introduced 1.435-metre wide tracks across 1,447km of the national rail network to accommodate trains at 250km/hr. But these have been scrapped, because a study found they may not be worth investing in terms of passenger volume.

Instead, two dual-track rail projects will go ahead. These will be on the Nong Khai-Map Ta Put route, which covers 737km and will cost 392 billion baht, and the Chiang Khong-Ban Phachi route, spanning 655km at 348 billion baht.

The construction of the routes should be completed in 2021 and will boost the speed of the trains to 160 km/hr.

Dual-track networks, high-speed rail routes and the Red Line electric train project could face the same problems as the Airport Rail Link if the SRT's administration remains the same, he said.

This is the old government's infrastructure plan, almost identical to the new regime's announced projects. 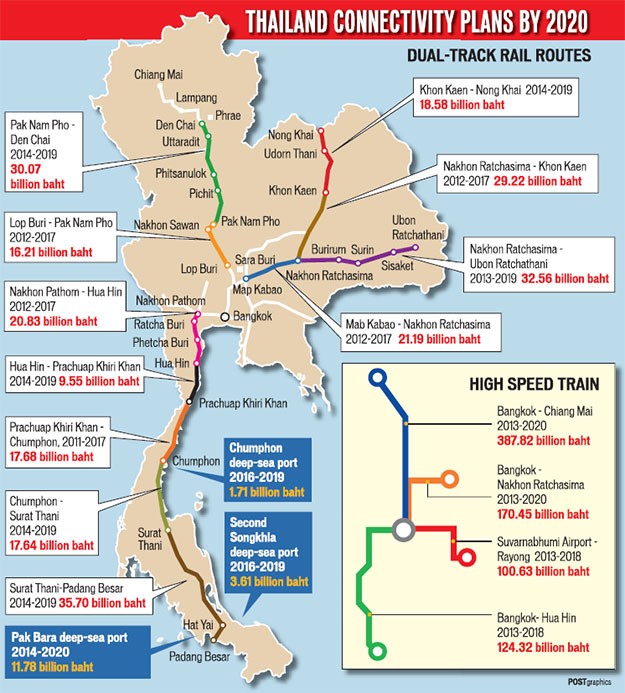