National police chief Somyot Pumpunmuang Tuesday defended the arrest of two Myanmar men for the murder of two British tourists on Koh Tao even as the suspects claim they were tortured.

"I insist that all officials in this case have done a good job;" Pol Gen Somyot told a press conference in Bangkok, "a perfect job."

Many inside and outside Thailand beg to differ. 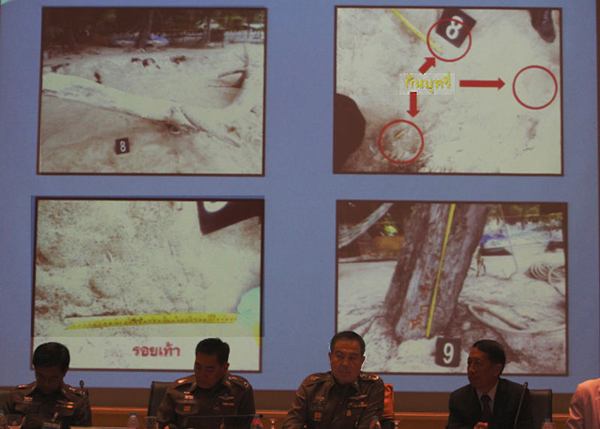 Police show some evidence at the briefing on Tuesday. (Photo by Tawatchai Khemgumnerd)

"Based on what we have been told, it seems to us like this case is a set-up and not based on hard facts," Aung Myo Thant, a lawyer contracted by the Myanmar embassy to defend 21-year-old suspects Zaw Lin and Win Zaw Htun, told the Democratic Voice of Burma, an independent Myanmar news website based in Norway.

In the interview with DVB, which provided the full names of suspects Thai police have yet to identify fully, Mr Thant said there were "inconsistencies with both the forensic report and evidence provided in the case."

Furthermore, U Moewai, a member of a delegation of Thai and Myanmar lawyers, embassy officials and migrant-rights activists who visited the two men Tuesday, told the Bangkok Post that both suspects reported being tortured during interrogation. They said they weren't sure by whom, but assumed it was by police officers.

Contradicting earlier reports that Myanmar embassy officials were satisfied with explanations provided by Thai authorities over the arrest of their nationals, Htun Aye, the embassy's second secretary, told the Bangkok Post Tuesday it was too early to say whether his team was happy with all the information they were provided by authorities.

"We have to review all information we gathered here to draft a proposal for the ambassador," he said.

At Tuesday's press conference - one Great Britain's ambassador originally planned, but then declined, to attend - police emphatically denied that either of the men was tortured.

"I confirm that there was no abuse of any of the suspects," said lead investigater Maj Gen Suwat Chaengyodsook. "During interrogation, the suspects' lawyer was present and physical check-ups were performed on them. The results were sent to doctors for verification. The suspects confessed by themselves."

Rights activists have maintained that none of the suspects had access to lawyers until after they were charged and have been made scapegoats. However, the suspects' lawyer, Mr Thant, did confirm to DVB that both men confessed to him that they killed Britons Hannah Witheride, 23, and David Miller, 24, while drunk.

Police said they began the investigation into the backpackers' murders after the Sept with 187 foreign and 58 Thai suspects and used closed-circuit camera footage, witness accounts and forensic evidence to whittle it down to the three men taken into custody.

In addition to Mr Lin and Mr Htun, identified by DVB as Maung Maung, is being held and treated as a witness.

Pol Gen Somyot insisted no one was tortured or assaulted and cited five pieces of evidence used to charge them.

Firstly, he said, investigators had testimony from a personal friend of the suspects. They also verified DNA samples taken from Witheridge's body at Chiang Mai University and Chulalongkorn universities; had images of the men from closed-circuit cameras, found Miller's telephone in Htun's living quarters; and obtained confessions form both suspects made in front of their lawyer.

"DNA found on the deceased's body matches the suspects," said Pol Maj Gen Suwat. "This is something that cannot be denied."

Pornpen Kongkachornkiat, director of the Cross-Cultural Foundation involved with the National Human Rights Commission, acknowledged the hard work of police, but said the public had valid concerns about the investigation.

The circumstances surrounding the arrest of the migrants, forced DNA testing and the suspects' lack of access to lawyers before being charged were dubious, she said. It all leads the impression that the suspects might not be aware of their rights and justice was not served, she added.

Pol Gen Somyot acknowledged that the investigation did not move as quickly as people had hoped, but blamed delays on social media, saying officers were forced to respond to demands to investigate Koh Tao's influential "mafia" figures. Valuable time, he said, was wasted on responding to "misunderstandings" on social media that, if ignored, would have made police look guilty of a cover-up.

However, all the claims made online turned out to be groundless after police had investigated them, he said.

BEIJING: Beijing has reached “temporary herd immunity” and its Covid outbreak is nearing an end, a city health official said on Tuesday, in another sign China’s unprecedented virus wave is waning.