Authorities are looking for ways to raise three old bridges across the Chao Phraya River because their low clearance from the water occasionally obstructs navigation. 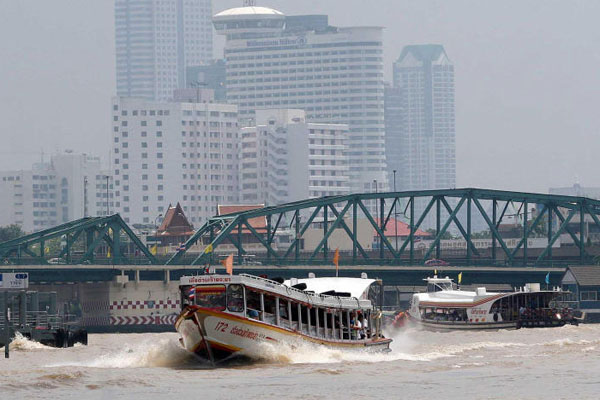 Memorial Bridge in Bangkok has a clearance of just 4.7 metres above the water, compared with the standard of 5.6 metres. (Photo by Pattarachai Preechapanich)

The three bridges should have the standard clearance of 5.6 metres above the river surface, Transport Minister Prajin Juntong said on Saturday.

At present, the Memorial Bridge poses the biggest problem as its clearance is only 4.7 metres. The clearance of the Krung Thon Bridge is 5.1 metres and that of the Nonthaburi Bridge is 5.3 metres.

The low clearance blocks return trips by some barges, which usually are empty and thus ride high on the water, for about three months in the rainy season and during high tides, ACM Prajin said.

Apart from finding ways to lift the bridges, transport authorities will ask river trasport operators to contain the heights of boats and cargoes to "meet halfway", the minister said.

Chula Sukmanop, director-general of the Marine Department, said the tasks had to be planned carefully because the three bridges had historical value.

He agreed that the biggest problem rests with the Memorial Bridge as it is the lowest.

Mr Chula said that instead of sailing empty barges on their return trips, operators could load the boats so that they would ride lower in the water and clear the bridges.

Elevating the old bridges would also affect their embankments and some land expropriation would be necessary to adjust the surrounding terrain, Mr Chula said.