Dismayed by the gruesome murders of two British tourists on Koh Tao and disgruntled with the sluggish reaction of Thai authorities, the British public has spearheaded a campaign to demand its government undertake an independent investigation into the case. 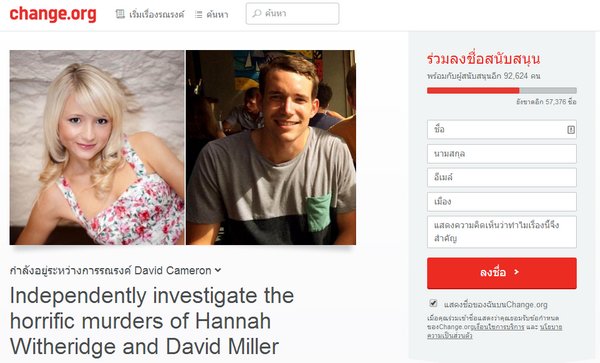 By Friday morning, more than 92,000 people had signed an online petition which was launched on Oct 4 on change.org. The petition urges British Prime Minister David Cameron, the government of the United Kingdom and UK Ambassador to Thailand Mark Kent to independently investigate the murders.

British tourists Hannah Witheridge, 23, and David Miller, 24, pictured on the petition, were found bludgeoned to death in the early hours of Sept 15 on Sairee Beach.

The British law stipulates that an e-petition with at least 100,000 signatures can be debated in the House of Commons.

Jersey Evening Post, a UK newspaper, reported on its website that hundreds of protesters were expected to gather outside the prime minister's office at 10 Downing Street late Friday Thailand time, and hand over the petition.

There are growing concerns over how investigations into the deaths of British tourists in Thailand are conducted, and many victims' families - in addition to those of the Sept 15 Koh Tao victims - have filed complaints with the Thai embassy in London.

Nadhavathna Krishnamra, charge d'affaires of the Thai embassy in London, said Friday's event would mainly involve the handing over of the petition.

Human rights advocate Surapong Kongchantuk said that if the campaign succeeds the UK government would be pressured to intervene.

However, it would not be able to interfere with the judicial process under Thai law.

Meanwhile, the parents of the two Myanmar murder suspects will travel to Thailand to visit their sons who are detained at Koh Samui prison.

U Htoo Chit, chairman of the Foundation for Education and Development, told Myanmar news organisation Mizzima earlier this week that U Tun Tun Htike and May Thein, parents of Win Zaw Htun, along with Phyu Shwe Nu, mother of suspect Zaw Lin, will visit Thailand for a month with the help of the Myanmar government and the Myanmar Association Thailand.

Mr Zaw's mother told the BBC the case had been fixed and her son was a scapegoat. She said her son should tell the police "the truth" — that he was not guilty. The Office of Public Prosecution Region 8 is expected to indict the suspects next week.

Meanwhile, Mark Kent met National Broadcasting and Telecommunication Commission (NBTC) member Supinya Klangnarong on Thursday, and demanded the Thai media be ethical in its reporting of the case.

Ms Supinya said she had received complaints from Mr Kent that Koh Tao victims' passports have been published by the media and on social media.

Mr Kent told her crime victims' personal information should not be passed on to the media if it contains no news value. Ms Supinya said the NBTC was trying to improve media ethics, but social media was beyond its remit. 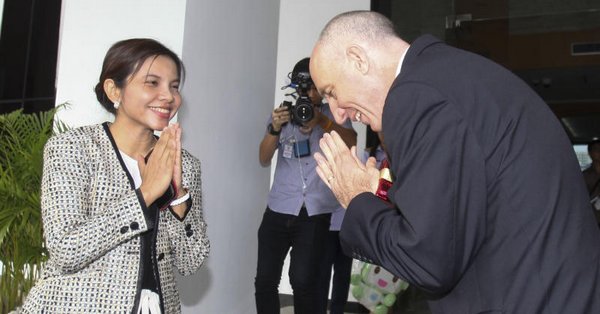 Supinya Klanarong of the National Broadcasting and Telecommunications Commission (NBTC) and UK ambassador Mark Kent discussed on Thursday what Mr Kent alleged was unethical conduct by the Thai media in its reporting of the Koh Tao case. The NBTC has tried to expand its regulatory powers to act as a broadcast media censor. (Photo by Pattarapong Chatpattarasill)