Police are checking unclaimed corpses of Asian men to determine if any of them match the description of an elderly Japanese man missing since last month.

Updating the media on the high-profile disappearance of Yoshinori Shimato, 79, senior police officials Tuesday said they were investigating thoroughly the backgrounds of Mr Tetsuo's 46-year-old Thai companion and her taxi driver husband, both of whom were detained Monday. 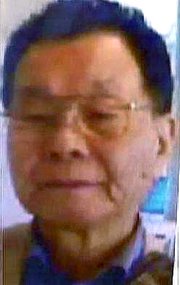 Mr Shimato's son, Tetsuo, filed a police report that his elderly father had been missing since Sept 21. Acting deputy national police chief Pol Lt Gen Ruangsak Jarit-ek said his boss, Pol Gen Somyot Poompanmuang, had ordered an intensive investigation of the Japanese man's disappearance, as it has drawn attention from both locals and foreigners.

Investigators planned to look for reports of unidentified and unclaimed bodies of Asians found since Sept 21 and thoroughly examine the background of Pornchanok Chaiyapa, who had reportedly been with Mr Tetsuo before his disappearance, Pol Lt Gen Ruangsak said.

Mrs Pornchanok, 47, was arrested with husband Somchai Kaewbangyang in Ang Thong province late Monday. They denied any involvement in the disappearance of the Japanese man, although Mrs Pornchanok was earlier charged with theft for using the his ATM card to withdraw about 700,000 baht.

She claimed she had taken Mr Shimato to a hospital in Bang Na district of Bangkok before his disappearance.

As police needed some times to collect evidence and find witnesses, they had the couple be detained at the 2nd Cavalry Division in Bangkok under martial law for two weeks. Before Monday's arrest, Mrs Pornchanok had been released on bail of 100,000 baht in the theft case.

Pending the detention, police were also checking surveillance-camera footage to determine the couple's whereabouts before and after the disappearance of Mr Shimato.

Police said Mrs Pornchanok previously was married to another Japanese man who died in 2003 after falling down the stairs. Bang Sao Thong police ruled an accident, but relatives suspected foul play motivated by the Japanese man's life insurance policy. Both the former and current Japanese lover suffered from heart disease, police said.

Mrs Pornchanok is a native of Bang Sao Thong district, Samut Prakan province, and has had three names, according to a source familiar with the case. She was married twice.

The first time was to Mr Somchai and they had a daughter. At the time she was Pensri Chaiyapa. In 2002, the woman adopted the surname of her former Japanese husband, Kashitoshi Tanaka. They also had a child. After his death, the woman changed her name to Pornchanok in 2004. She got to know Mr Shimato in April this year.

An arrest warrant issued by the Phra Khanong district court was outstanding for Mrs Pornchanok for assault, and that she had also faced a fraud charge.

LONDON: Britain on Wednesday became the first country in the world to approve the Pfizer-BioNTech Covid-19 vaccine for use and said that it will be rolled out from early next week.