The two Myanmar suspects in the Koh Tao murder case officially retracted their confessions Tuesday night, saying they had been coerced into admitting they’d killed two British backpackers and now demand justice, according to the Lawyers Council of Thailand. 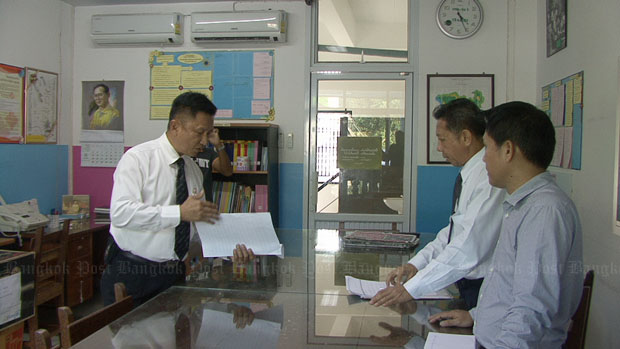 Ratsada Manurassada, from Lawyers Council of Thailand, hands in a petition seeking justice on behalf of the Koh Tao Myanmar suspects to prosecutor Paiboon Achawananthakhun on Tuesday. (Photo by Supapong Chaolan)

During their talk, Mr Ratsada said, the suspects said they had been forced to confess to the rape of Witheridge and the killing of her and Miller. They also demanded that the court-appointed Rohingya interpreter be changed, as he had abused both men. They also said they were not confident in his translation and interpretation of their statements.

Mr Ratsada quoted the two as saying that while they are from Myanmar's Rakhine state, they are Buddhist, not a Rohingya Muslim as is the interpreter. With a dialect tied to the Rohingya's native country of Bangladesh, the translator is not able to communicate effectively, the two men said.

The two suspects signed a statement drafted by lawyers confirming they did not commit the rape or murders. The written statement was read to the two via another interpreter.

Their lawyers then filed a petition with state prosecutor Paiboon Achawananthakhun seeking a justice and a fair decision on their fate. The petition is attached to the suspects' retracted confessions and assault allegations.