Suspect confesses to another murder

SAMUT PRAKAN — A suspect in the murder of Japanese teacher Yoshinori Shimato has confessed to suffocating another Japanese man to death 11 years ago, according to police. 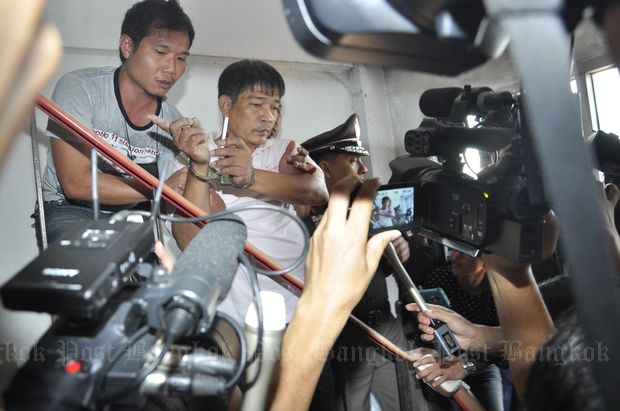 Somchai Kaewbangyang re-enacts the crime he is accused of committing at a building in Bang Phli district of Samut Prakan on Saturday. (Photos by Sutthiwit Chayutworakan)

Both men had been married to Pornchanok Chaiyapa, the girlfriend of Somchai Kaewbangyang and his co-accused in the Shimato slaying.

Mr Somchai was taken on Saturday to a four-storey building containing two shophouses on Bang Na-Trat Highway in Bang Phli district to re-enact the 2003 slaying of Kasitosi Tanaka.

The day Tanaka died, Mr Somchai said he hid on the landing between the third and fourth floors of the building. When he saw Tanaka entering the bathroom on the third floor, he pushed him down the stairs.

He then shoved Tanaka's head between the balusters and pressed down on the man's neck with his feet until he died.

Police said Mr Somchai told them that jealousy had led him to kill both Tanaka and Yoshinori Shimato, whose dismembered body was found this week. Mrs Pornchanok Chaiyapa had been married to both men.

In Tanaka's case, he also wanted to take over his farm tools shop.

When police brought Mrs Pornchanok to the building, she fainted.

Somsak Sae Lim, Mr Somchai's brother, said he and Vichai, their father, worked for Tanaka in 2003. On the day of the murder, Mr Somsak said, the three of them had dinner at the shophouse. They were joined by Tanaka and Mrs Pornchanok.

At around 8pm, Tanaka and Mrs Pornchanok went to their bedroom on the third floor while Mr Somchai slept on the mezzanine.

In the middle of the night, Mr Somsak said his father woke him after hearing a cry for help. They rushed to the third floor and found Tanaka unconscious on the stairs and Mr Somchai and Mrs Pornchanok standing nearby.

He and his father brought Tanaka to the first floor and had him rushed to hospital while Mr Somchai took a taxi and fled.

Mr Somsak said Mrs Pornchanok told him not to tell anyone that Mr Somchai had been at the scene. She told him to tell police that Tanaka had died from falling down the stairs.

Pol Lt Gen Suvira Songmetta, acting assistant police chief, said authorities had witnesses and material evidence, as well as a confession in line with an autopsy which showed that Tanaka did not die from a fall.

An arrest warrant was issued and Mr Somchai was charged with first-degree murder. He will be detained while officers complete their report for submission to public prosecutors.

Keiko Matta, 31, met with Bang Sao Thong police and asked them to reinvestigate the death of her father after learning that Mrs Pornchanok had been charged with killing Shimato.

Police said earlier that Mr Somchai confessed to killing Shimato before chopping up his body and throwing the pieces into a canal.

Ms Pornchanok admitted she witnessed the killing and gave police some "useful information", but they declined to give further details.

Police on Friday found knives and other items believed to be connected to the murder at the home of the suspects' daughter.

Police expect to wrap up the investigation within 15 days. 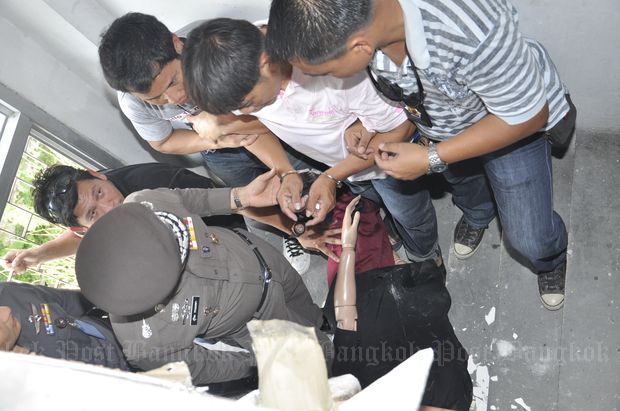