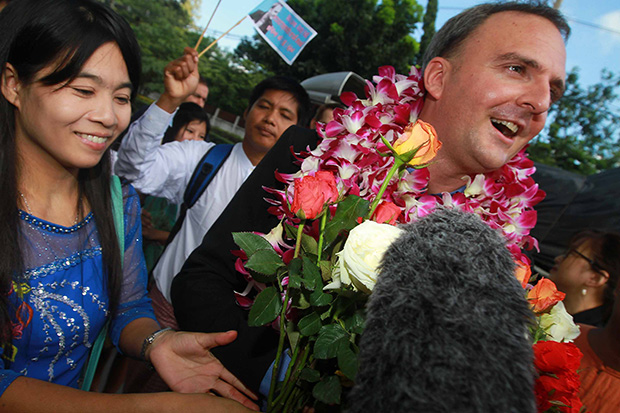 British rights activist Andy Hall is congratulated by supporters as he leaves the Prakanong Court Wednesday. Criminal defamation charges were dismissed against the Finnwatch researcher for his report on human-rights violations at Natural Fruit Co. (Photo by Somchai Poomlard)

The Prakanong Court dismissed charges brought by Natural Fruit Co due to unlawful interrogation under Section 120 of the Criminal Code. Mr Hall could have faced up to a year in jail if convicted of defamation -- a criminal offence in Thailand.

"We are relieved and glad that justice has prevailed in this case," said Sonja Vartiala, executive director of Finnwatch, the Finnish rights watchdog group for which Mr Hall worked as a researcher.

"The court hearings were yet another confirmation that, as Finnwatch's report revealed, there are serious problems in working conditions at Natural Fruit. The question that now must be asked is why Thailand's authorities have not taken action against the company however," Ms Vartiala said.

Natural Fruit, a major supplier to the European drink market, denies the allegations.

But Mr Hall stood by his research and accused the company of trying to undermine the report's findings through its legal action.

"We had many witnesses including from the company ... and there's no evidence to suggest I am guilty," Mr Hall said before the verdict.

The case relates to an interview Mr Hall gave to the Al-Jazeera television network over his 2013 report for Finnish rights watchdog Finnwatch called "Cheap Has a High Price".

More serious charges await under the computer crime act - which carry up to seven years in jail for each count - and are due to be heard in November. The fruit processor is also seeking $10 million through a civil suit.