Borwornsak Uwanno was handpicked by the National Council for Peace and Order (NCPO) on Tuesday to chair the Constitution Drafting Committee (CDC) - a choice long expected after the junta unveiled its plan to write a new charter. 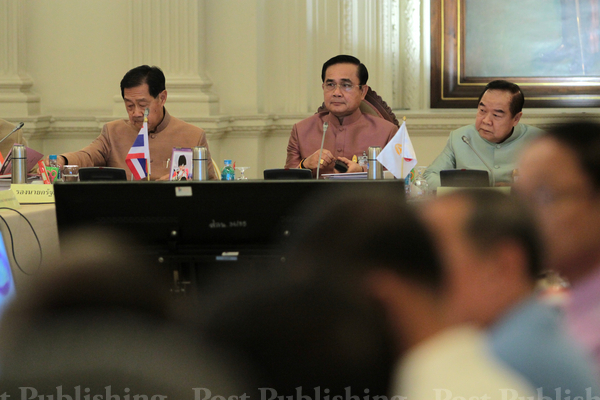 Gen Prayut Chan-o-cha chairs a joint meeting of the cabinet and National Council for Peace and Order at Government House on Tuesday to select charter drafters. (Photo by Chanat Katanyu)

The secretary-general of King Prajadhipok's Institute had long been tipped to chair the 36-member panel because of his legal expertise and involvement in writing previous constitutions.

The NCPO also selected five representatives to sit on the panel, and another five were chosen by the cabinet during their joint meeting at Government House. 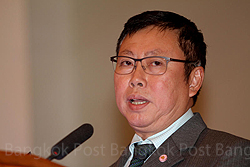 Mr Bunjerd is dean of the law faculty at the National Institute of Development and Administration and Mr Krit is  a former director-general of the International Treaties and Law department at the Foreign Ministry.

Gen Prayut Chan-o-cha chairs the NCPO and as prime minister is also head of the cabinet.

''The NCPO has thoroughly considered the list through several steps until it was finalised and it is confident that they are qualified and acceptable to the public,'' NCPO spokesman Col Winthai Suwaree said after the meeting.

The 11-member list was be sent to National Reform Council (NRC) president Thienchay Kiranandana, who officially announced the formation of the CDC on Tuesday.

The 36-member charter writing panel will comprise five representatives of the NCPO, five members chosen by the cabinet, 20 by the NRC, five by the NLA, and the chairman handpicked by the NCPO.