A Nakhon Ratchasima irrigation office has revoked permission for a planned concert near the Khao Yai National Park following environmental protests and the disclosure that the civil servant who authorised the Nov 29 show had no authority to do so.

Chidchanok Somprasert, director of the 8th Irrigation Office on Thursday held a press conference to explain how the area in Wang Nam Khieo district came to be provided for the Voice of Love Music Festival. He said a letter granting permission to Good Life Project Co to organise the concert was nullified and a disciplinary panel will investigate the employee who wrote it.

The media briefing came after nature lovers under the umbrella of the Love Wang Nam Khieo group strongly opposed the music festival. 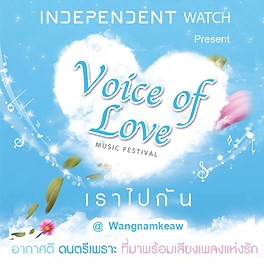 A permit for the Voice of Love Music Festival planned for Nov 29 at a Nakhon Ratchasima reservoir has been cancelled. (Photo from Voice of Love Facebook page.)

Mr Chidchanok explained that the organiser sought permission to use land under the jurisdiction of the Sankhamphaeng reservoir in tambon Wang Mee of Wang Nam Khieo district on Oct 27. But the head of the reservoir was traveling on business at the time. In his stead, Sombat Chidtakhob, a permanent irrigation staffer, was assigned to oversee tasks at the reservoir.

After complaints began coming in, he had asked reservoir head Chalermruj Luelok about the concert, only to discover he was not aware of it.

Mr Chidchanok said he notified Good Life Project on Oct 30 that the concert's permit was cancelled. He insisted his agency had no policies that would allow any private firm to hold commercial activities in its area.