The Thai and Chinese air forces will hold their first joint training session for pilots later this month, paving the way for a full military exercise between the forces in future. 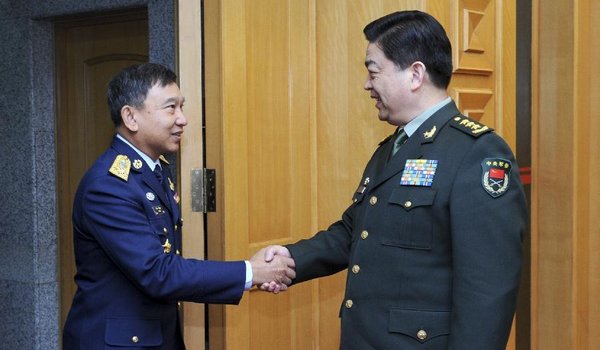 Current junta figure Air Chief Marshal Prajin Jantong (left) made an official visit to China a year ago this week, in his then-role as commander of the Royal Thai Air Force. He and Chinese State Councilor and Defense Minister Chang Wanquan discussed limited pilot exchanges, which will begin soon. (Photo by Chinese government news agency Xinhua)

Defence Minister Prawit Wongsuwon said Thursday the two sides have been working on the plan for some time. The proposal was finally approved by Chinese Defence Minister Chang Wanquan during Gen Prawit's visit to China at the end of last month.

Sources said a long-term plan for a full joint aerial exercise between the two forces is still "years away".

Gen Prawit, who is also deputy prime minister, said the two countries have been holding joint army and navy drills for several years, but the Chinese and Thai air forces have never conducted any training together.

Although both sides agreed to it in principle, the issue was put on the back burner following Thai political turbulence and changes of minister.

The plan was revived after the Chinese defence minister raised the matter with Gen Prawit.

The plan was then brought to the air force chief for consideration, the source said.

The first drill will be carried out later this month.

The exact schedule is being finalised with the Chinese air force.

According to the source, a full-scale joint exercise for the Thai and Chinese air forces requires careful planning because the forces have vastly different doctrines, fighter jets and communication modes.

A joint working group will come up with preparations for further training once the first exchange pilot sessions are complete.

The next step could be a "goodwill visit" where Chinese pilots will fly their fighter jets to a Thai air base and vice versa to exchange expertise.

"A full joint air exercise between the Thai and Chinese air forces must be approached step by step. It will take years before we can fly fighter jets together in the sky," the source said.

He said a full exercise would require both sides to sign a memorandum of understanding to set out rules, including who would be responsible for any accidents and damage.

The Thai air force must also inform their US and Swedish counterparts about the drill since Chinese pilots will be trained in fighter jets they manufactured, the source noted.

The armies of both countries currently hold a joint annual training exercise, while the navies hold an equivalent event every two years.