The low pressure system which caused heavy rain in the South has now passed through the region and into the Andaman Sea, leaving locals breathing sighs of relief. 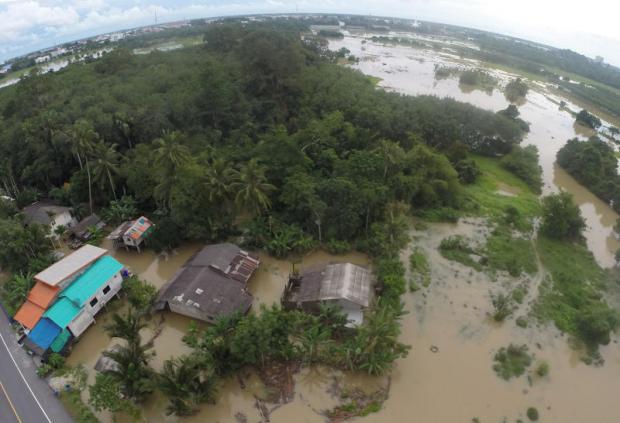 Houses along the main road in Muang district of Nakhon Si Thammarat are inundated by floods yesterday. A low pressure system has caused flooding in the South. Thiti Wannamontha

The Meteorological Department said yesterday afternoon the rain would continue in southern provinces on the Gulf of Thailand's coast for one more day although the system was already heading to the Andaman Sea.

Those southern provinces on the Andaman coast, meanwhile, are being advised to brace for steady rain for two more days. The provinces are Ranong, Phangnga, Phuket, and Trang.

Persistent rain which started on Saturday night and ran into yesterday morning resulted in several flash floods in the South.

In Nakhon Si Thammarat, flooding was reported in several areas of Phipun district where torrential rain began falling on Friday.

The average flood levels varied between 50 centimetres and 2 metres.

Rescue teams were deployed to survey the flood-affected areas in the province and help evacuate flood victims.

The rains have also raised worries over mudslides, after one in Phipun district in 1988 killed 230 people.

These communities were in areas used as water retention zones designed to prevent run-off from flooding inner parts of the district, he said.

Some roads in Phangnga province were also submerged under floodwaters yesterday morning while local administration authorities insisted they would be able to drain the water off the roads in about two hours.

Motorists were warned to drive more carefully while travelling on those roads.

Fourth Army chief Lt Gen Prakarn Cholayuth said some military forces in the South have been mobilised into rescue teams to help people affected by the extreme weather.

A formal disaster relief centre will be set up if the flood situation intensifies, he said.

Meanwhile, a 200 metre-long section of the Asian Highway 41 in tambon Wag Tako of Chumphon's Pathiu district was flooded yesterday afternoon leaving only one lane passable. Road traffic was congested as a result.

Efforts to drain the floodwaters off the highway were hampered by rising water levels as heavy rain continued to fall on the area.

Further south in Krabi province, all eight districts were advised to monitor the water situation after persistent rain raised water levels in several main canals to their maximum limits.

About 200 rai of farmland in Khao Phanom district were inundated yesterday forcing at least six households in nearby areas to leave their houses for safety.