Rain to continue as South recovers from weekend flooding

Heavy rains were expected to continue in eight southern provinces Monday as the region tries to recover from flooding that damaged hundreds of homes over the weekend.

Flooding hit about 200 houses and roads in the Chamuang and Nong Phor sub-districts of Khuan Khanun district in Phatthalung Sunday night. Storm runoff from the low-pressure system that has influenced the South since Friday put Phothong-Si Banphote Road in Khuan Khanun under 50 centimetres of water, leaving it impassable to small vehicles.

The increasing level of the Tha Nae Weir in Khao Pu sub-district of Si Banphote district flooded about 300 houses and more than 1,000 rai, or 1.6 square kilometres, of farmland in Cha Muang sub-district of Khuan Khanun district on Monday.

In Trang province, runoff hit about 100 houses in Lamphura sub-district of Huai Yot district about 2am on Monday. Flooding levels hit one metre in some areas.

The low-pressure area that affected the South has already passed, reaching the Andaman Sea and moving toward the Bay of Bengal Monday. Once the rains relent, floods will recede soon, officials said.

The storm also brought some good fortune. Rough seas since Saturday washed about 10 tonnes of shells ashore at Pak Phanang beach in Tha Phaya and Khanab Nak sub-districts of Pak Phanang district and locals were collecting them to make products for sale. 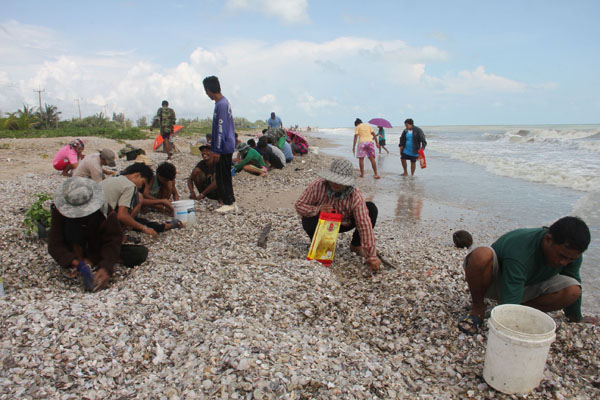