Prominent members of civil society are calling on their peers on the charter drafting and reform committees to push for the lifting of martial law before the two panels move on with their work.

In a sign that the civil society movement is splitting about its role in helping the regime do its work, Jon Ungphakorn, a former Bangkok senator, said the five civil society members of the Constitution Drafting Committee (CDC) and the National Reform Committee (NRC) must show their democratic spirit by making the move. 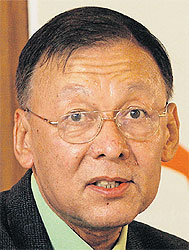 Jon: Panelists should do right thing

They must call for freedom of expression and assembly before the panels move on with writing the charter and working on the reform process, said Mr Jon, also a Magsaysay Award laureate.

Social activists have been at odds since they had to nominate their representatives to sit on the NRC and the CDC.

Nimit Tianudom, an HIV/Aids awareness activist, defended the work of his colleague, Supatra Nacapew, on the NRC, saying the two of them have pushed for better health care for patients regardless of which regime was in power. They saw no problem with being on the panels.

Mr Jon, however, questioned how a good welfare system could be launched while civil and political rights were suffering.

Drafting the charter under the blanket of martial law and a ban on political debates concerning the new charter will not help the NRC and CDC, said Mr Jon.

"How could we have transparent and accountable public hearings for the draft charter? And what's the merit, if there will be no referendum on the draft?" he said on his Facebook page.

Activists should be sensitive not only to the needs of Aids patients but the public at large, he added.

"I just hope that at least Supatra, Ticha (Na Nakorn), Jade (Donavanik), Buntoon (Srethasirote) and Somsook (Boonyabancha) will have the courage to say they will not join the drafting if martial law is not revoked and freedom of expression is not guaranteed,'' he said.

"They must also call for a referendum on the draft," Mr Jon said. He was referring to the five civil activists who have been chosen to sit on the NRC and the CDC.

Mr Buntoon told the Bangkok Post the NRC may have to find ways to make the reform more open to pubic participation.

Senior NRC members also might have ask the military if martial law is still needed.

"Maybe the security authorities have certain information that we don't have, in which case they should share it," Mr Buntoon said.

He said he has been able to hold reform forums in various provinces without any problem.

"In areas where there are no threats to security, martial law should be lifted,'' said Mr Buntoon, an environmental scholar and activist.