Samart Corporation and the national police chief have acquired more than half of handset distributor M-Link Asia Corporation after the stake was offered for sale by the Wongsawat family, which has links to the influential Shinawatra clan.

The 1.2-billion-baht acquisition of the 50%-plus holding in M-Link marks the gradual exit of both families from their vast business interests in the burgeoning telecommunications industry. 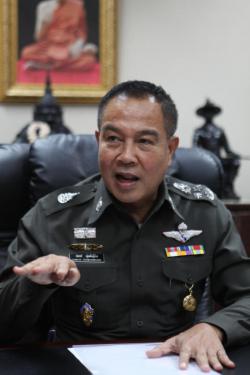 "An acquisition contract is expected to be signed next month after the recent closing of the deal," said a source familiar with the agreement.

Samart, headed by founder and chief executive Watchai Vilailuck, together with the new police chief, Pol Gen Somyot Pumpanmuang, will hold a combined 50%-plus stake in M-Link once the deal is completed, the source said.

The Wongsawat family owns 28.6% of M-Link, the company website said.

"After the deal is completed, the Wongsawat family's shareholding will be less than 5%," the source said, adding that the family planned a complete exit next year.

"The deal should erase Thaksin's influence on M-Link," the source said.

Proceeds from the acquisition will be used to repay debts and expand business. 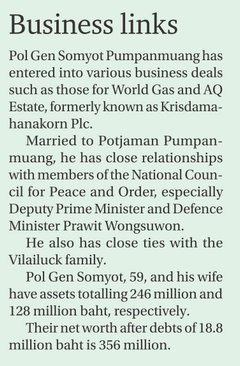 M-Link plans to undertake a "sweeping overhaul" of its organisational and business structures, revamping its management team and structure with a new chief executive, the source said.

MLINK shares closed yesterday on the Stock Exchange of Thailand at 5.70 baht, down 50 satang, in trade of 282 million baht.