Soldiers and police thwarted an attempt Sunday by land reform advocates to hold a press conference to explain why the junta had banned them from holding a talk show about land reforms.

Protesters hold letters detailing the ban by the National Council for Peace and Order on a land reform talk show scheduled for Sunday. When the organisers tried to hold a press conference at the Oct 14 Memorial to explain the issue to the media, police and soldiers stopped them and soldiers detained five. (Photo by Thanarak Khunton)

Five organisers of the talk show were rounded up and taken for talks at Chana Songkhram police station after they protested with black tape over their mouths in front of the Oct 14 Memorial at Kok Wua Intersection on Ratchadamnoen Avenue and distributed open letters to reporters.

One of the five is Nitirat Sapsomboon, a former secretary-general of the Student Federation of Thailand.

They protested against the National Council for Peace and Order's (NCPO) ban on the event scheduled Sunday at the Alliance Francaise on Witthayu Road in Bangkok.

Entitled "Our Land: Who Do the Plots Belong To?", the event had been scheduled to include a talk show and a concert.

On Saturday, Pakorn Areekul, a member of the organising team, said Lt Passakorn Kulrawiwan, commander of the 1st Cavalry Battalion, telephoned him to say that the NCPO would not permit the event.

The military said they were worried about some of the speakers, but did not give further details, he said.

Mr Pakorn said the organisers originally planned to hold a press conference at the Oct 14 Memorial to reveal what he alleged was "interference by the military to pressure the talk show to stop".

But police and soldiers were deployed at the venue and set up barricades to prevent them from using it. Instead, the organisers used black tape to cover their mouths as a gesture of protest against their freedom of speech being restricted.

Mr Nitirat left a space between himself and the four other demonstrators to avoid breaking the martial law prohibition on political gatherings of more than five people.

They also handed out open letters to reporters in which organisers expressed opposition to "interference and obstruction of freedom to access knowledge, and use of force".

No violent incidents were reported.

During police questioning, Niran Pitakwatchara, a National Human Rights Commission member and Kesarin Tiewsakul, secretary to the commission, were present.

At 4.50pm, police released the organisers without pressing any charges.

Mr Nitirat said he believed the NCPO did not permit the event to go ahead because they were concerned about some of the guest speakers invited for the talk show, one of whom was prominent social critic Sulak Sivaraksa. 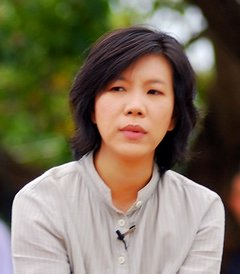 Nattaya Wawweerakup: Soldiers started a firestorm of media protest when they ordered her off the air from Thai PBS. (Photo via Facebook)

The organisers had previously sent a letter to the 2nd Cavalry Division to explain that the talk show was intended to educate people about issues on land reform, ecology, and housing. The venue chosen for the talk show was under the jurisdiction of the military division, so a request to hold the event was submitted.

The division reportedly asked that some of the speakers be withdrawn, but the organisers insisted on sticking to their original plan, so the request to hold the event was turned down.

Meanwhile, Thai Journalists Association (TJA) vice chairman Manop Thip-osod said the Media for National Reform working group would meet today to discuss the case of Nattaya Wawweerakup, a Thai PBS journalist who was removed from her role as host of a programme last week after soldiers visited the station.

The working group will determine what action should be taken over the issue, Mr Manop said.

The troops' superiors reportedly objected to questions asked by Nattaya during an episode entitled "Listening to Southerners' Views Before Reform". The episode, shot in Hat Yai and aired on Nov 8, discussed people's attitudes towards the coup.

Thai PBS on Saturday issued a statement demanding an end to media intimidation and interference. The broadcaster said it will try its utmost to safeguard editorial independence and protect public access to news and information.

It said the Voice of the People programme would continue to air.

On Friday, the Thai PBS board of governors issued a separate statement insisting Nattaya had acted in line with international media standards, and would only be removed from the programme temporarily.

NCPO and army spokesman Col Winthai Suwaree on Sunday denied the NCPO is infringing on the rights and liberties of the media.