BEIJING: More than 200 refugees detained in Thailand earlier this year are believed to be Chinese Uighurs and should be repatriated, a Chinese consul said, dismissing concerns they will be mistreated. 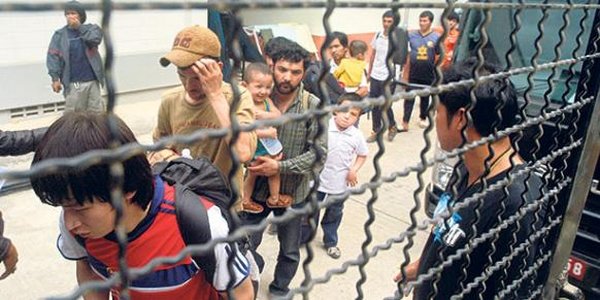 Around 200 refugees believed to be ethnic Uighur people from Xinjiang were rescued from human traffickers in March, and have been held at a detention centre in Songkhla province while talks attempt to solve their case. (AP photo)

The refugees' claim to be Turkish cannot be confirmed and they refuse to cooperate with Chinese authorities with proper identification, said Qin Jian, the consul in Songkhla.

"They have been uncooperative and refused to communicate at all," Mr Qin said.

The refugees are likely fearful of being mistreated in China if they are returned, although Mr Qin said such concerns are unwarranted.

"If they do not have criminal records back in China, there will be no prosecution," the consul said.

Tensions between minority Uighurs and majority Han have left about 400 people dead in the past 20 months.

Beijing has blamed the violence on terrorism, separatism and extreme religion and has harshly cracked down in the Uighurs' far northwestern home region.

However, there has been no confirmation of their Turkish identity since staff from the Turkish embassy met with the group, Mr Qin said.

Dozens of men in the group have been identified as Uighurs and the others in the group are also believed to be of the Chinese minority, based on physical similarities, Mr Qin said.

The Washington-based Uyghur American Association has called upon the Thai government not to return them to China but to allow them access to the United Nations' refugee agency to request asylum.

"Uighurs have been forcibly returned to the hands of their persecutors in the past with dire results," said Alim Seytoff, president of the association.

Mr Seytoff said the increasing numbers of Uighur refugees is an indication of Beijing's repression of the Muslim minority.

Since March, the suspected Uighurs have lived in a Songkhla detention centre, but have provided little information to authorities, probably to try to confuse their origin and avoid being returned to China. (Reuters photo)

Although True Bangkok United have suffered a slump in form since Thai League 1 began its second half of the season earlier this month, coach Totchtawan Sripan is looking forward to beating leaders Buriram United on Sunday.

The local banking sector reported higher net profit for 2021 thanks to lower loan-loss provisions and improved operating profit, despite challenging economic conditions given the impact of the prolonged pandemic.