Prime Minister Prayut Chan-o-cha has insisted the media enjoys freedom and denied being involved with the removal of a Thai PBS programme host.

His reaction was in response to criticism of the government and the National Council for Peace and Order (NCPO) when Nattaya Wawweerakup was removed from her role on a Thai PBS programme after soldiers visited the station. 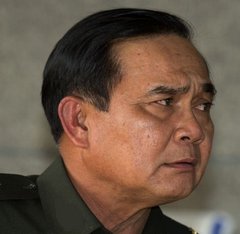 Gen Prayut: Thai PBS visit 'was not a threat'

Gen Prayut said he did not order the removal but acknowledged NCPO representatives went to meet and "discuss" some matters with Thai PBS executives and the show host.

"It was not a threat, and the information I obtained suggested the removal was an internal adjustment. Soldiers do not know who is who. How could they remove anyone?" he said.

"We should respect the rules. You are members of the public but ask whether it is proper for people to verbally attack me, the government or the NCPO. We are here to undertake reform but you blamed us for what happened before we came.

It is unacceptable," Gen Prayut added without mentioning the programme.

Gen Prayut reiterated the media is free but asked for understanding over several problems that need resolution.

The group chairman, Thepchai Yong, said Monday that Gen Prayut should communicate with the public and send a clear signal to his subordinates about his stance on this case. He said the premier should clarify that such incidents should not occur, particularly the recent visit to Thai PBS, which was seen as muzzling the media.

The incident, in which the officers said they visited the station on the orders of their superiors should not have happened as it was unclear whether the order came from their commanders, Mr Thepchai said.

The call came after reports that five army officers met Thai PBS executives and demanded they stop airing The Voice of the People that Change Thailand programme.

The troops' superiors reportedly objected to questions asked by Nattaya during an episode entitled Listening to Southerners' Views Before Reform. The episode, shot in Hat Yai and aired on Nov 8, discussed people's attitudes towards the coup.

A message will be given to the government and the NCPO that members of the press can play a role in boosting the reform atmosphere, Mr Thepchai said.

Mr Thepchai was speaking after he chaired a meeting of the Media for National Reform working group. The group held the meeting to map out the proposals on public and media freedom of expression to be forwarded to the National Reform Council.

Mr Thepchai, who is also the president of the Thai Broadcast Journalists Association, also urged the NCPO to consider scrapping announcements No.97 and No.103.

The announcements prohibit the media from inviting academics, former government officials, judges or members of independent bodies for interviews that may "cause "confusion" in society. They also ban criticism of the NCPO and propagation of confidential official information.