Prawit in Myanmar for regional talks

Deputy Prime Minister and Defence Minister Prawit Wongsuwon has flown to Bagan, Myanmar, to attend the Asean Defence Ministers Meeting on Tuesday and Wednesday, and for direct talks with his Japanese, Lao, Singaporean and Vietnamese counterparts. 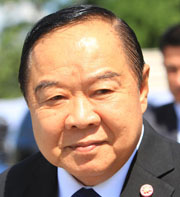 Defence spokesman Khongcheep Tantrawanit said on Tuesday that in bilateral talks with the Japanese defence minister, Gen Prawit would discuss issues assigned by  Prime Minister Prayut Chan-o-cha, who will visit Japan in mid-December.

Japan is about to amend its defence laws to  allow it to take a more active military role. Discussion with Thailand woud over cooperation on security and military affairs, research and development and the national defence industry, the spokesman said.

In his talks with the Lao defence minister, Gen Prawit would discuss Thai-Lao roles in disaster prevention and mitigation in Asean. At the meeting with the Singaporean defence minister he would urge Singapore to buy Thai ammunition for use during military drills in Thailand.

A fire broke out Thursday at India's Serum Institute, the world's largest maker of vaccines, but a source said production of the coronavirus vaccine was not affected.

RATCHABURI: A suspected major online wildlife trader has been arrested and items including pelts of wild tigers and leopard cats, barking deer antlers and animal bones seized during a raid on a house in Pak Tho district.