A Thai radio show host has been sentenced to five years in prison for royal defamation, his lawyer said Tuesday, one of the first sentences passed by a military court for breaching the lese majeste law since May’s military coup.

The military court Tuesday also approved a police request for 12 days of detention for a woman accused of making a defamatory post on a Facebook page she claimed had been hacked. Meanwhile, the wife of Somyos Prueksakasemsuk, a lese-majeste defendant, sought bail for her husband for the 16th time. 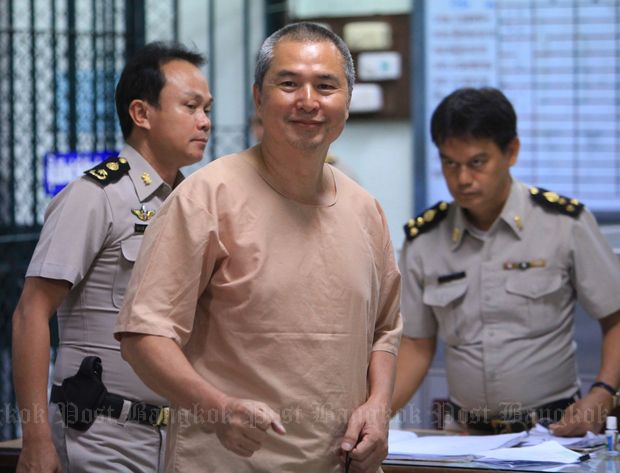 Somyot Prueksakasemsuk is brought to hear the Appeal Court's verdict on Sept 19, 2014. (Photo by Tawatchai Khemgumnerd)

In the case of Kathawut Boonpitak, 59, who hosts an online radio show from overseas, was arrested on his return to Thailand in June for defaming the monarchy on his programme, according to Sasinan Thamnithinan, who works for the Thai Lawyers for Human Rights Centre.

He was summoned by the junta in June and has been in military and police custody since then.

The lawyer added that her client, who travelled to Thailand to attend the funeral of a relative, had been denied bail.

Lese majeste offences carry a jail term of 3-15 years. Courts tend to apply the penalty to each count in a case.

Most cases to date have been handled in civilian courts rather than military ones.

"Initially the military court sentenced him to 10 years in prison but as he confessed the judge halved the sentence to five years," said the lawyer.

However, she said the sentence was long compared to civilian courts, which usually give about three to five years' imprisonment if a defendant does not plead guilty.

An official from Bangkok's Military Court told AFP a lese majeste verdict had been scheduled Tuesday but provided no further details. He said there had been other sentences in the military court for the same offence but declined to say how many.

Rights groups have voiced particular concern over the fate of suspects charged under martial law, imposed by the army two days before the coup, as they have no right to appeal in a military court.

Rights groups also say there has since been a rise in both charges and convictions under the law. Tuesday certainly proved to be an active day.

Jaruwan Lampong, a 26-year-old Phetchabun native, now faces 12 days of detention, even though she claimed her Facebook account had been hacked.

Ms Jaruwan, a factory worker, was taken into custody and interrogated by soldiers on Sunday. The soldiers also detained her boyfriend but his location was not known, according to Prachatai.

Also on Tuesday, the wife of Somyot Prueksakasemsuk, a lese-majeste defendant, sought bail for her husband for the 16th time.

She put up 1 million baht in cash on Tuesday as surety for his temporary release pending the Supreme Court's decision, expected to take 2-3 years.

Somyot, the former editor of the Voice of Thaksin magazine, was detained without bail in April for two years before he was convicted and sentenced to 10 years in jail by the criminal court in January 2013. The Appeal Court upheld the sentence on Sept 20 this year.

He was found guilty of publishing two articles written by another author under a pseudonym in 2010.

Somyot pleaded not guilty and argued he was the editor and not the writer of the articles.