The Royal Thai Navy will dust off a proposal to buy submarines after years of failed attempts to equip itself with the expensive underwater craft.

Adm Kraisorn said he had proposed the navy’s latest development plan, which includes the bid to procure submarines, to Deputy Prime Minister and Defence Minister Prawit Wongsuwon during his visit to navy headquarters on Monday. 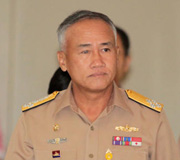 Adm Kraisorn said Gen Prawit agreed with the planned procurement of submarines and instructed the navy to present detailed studies on the types of submarines it wanted and the cost to see if they are affordable.

The navy has pressed governments for years to buy submarines to help protect the Gulf of Thailand.

The bid to equip the navy with submarines began when Banharn Silpa-archa was prime minister in 1995. Back then, Kockums of Sweden were the prime target. But alleged corruption by politicians and middlemen who wanted to pocket money from the project led to the deal being sunk.

Ten years later, the navy renewed its efforts with a proposal to buy used submarines from China under the Thaksin Shinawatra administration. But the military coup on Sept 19, 2006 killed that bid.

In 2010, then navy commander Kamthorn Phumhiran approved a plan to set up a Submarine Squadron, with expectations of having six used German U206A submarines worth a total of 7.7 billion baht. But it was met with resistance and never passed the planning stage.

In 2012, then navy chief Surasak Rounroengrom approved guidelines to train navy personnel in submarine operations, which led to navy personnel studying submarines with the help of countries who have had them for a long time.

In July this year, the Royal Thai Navy’s Submarine Squadron was officially launched at Sattahip naval base in Chon Buri province. The navy has sent 18 officers to Germany for training in submarine technology and another 10 to South Korea to attend a training course on international diesel submarines.