Police brought nine suspects of lese majeste and bribery charges to be detained at the Criminal Court on Ratchaphisek Road Monday evening. Six of them arrived in the afternoon while the three major suspects including former Central Investigation Bureau chief Pol Lt Gen Pongpat Chayapan (in white T-shirt) and former CIB deputy chief Pol Maj Gen Kowit Wongrungroj were brought to the court in the evening. (Video and photos by Pattanapong Hirunard)

Police submitted the charges to the court yesterday to support the arrest warrants.

Before and after: Pol Lt Gen Pongpat Chayapan is seen (above) in a photo taken earlier this year during a crime-busting press conference and, below, at his arrest on Sunday.

Pol Lt Gen Pongpat and Pol Maj Gen Kowit were also charged with operating gambling dens in Huai Khwang at which they allegedly said they would hand the money over to the "monarchy".

Mr Sawong and Mr Rerngsak are charged with possessing the carcasses of several protected species.

Mr Chob and his wife Tiyaphan are charged with extortion.

Mr Chob, reportedly a deputy director of a school in Nonthaburi, lives near a house of Pol Lt Gen Pongpat's mother in Bang Luai district in the same province.

Justice Minister Paiboon Koomchaya on Monday discussed their alleged crimes with senior officials at the Anti-Money Laundering Office (Amlo) and Department of Special Investigation (DSI) and told the two agencies to start looking into the case to support the police investigation.

The DSI, which handles "special cases", has been told to prepare to take action if police determine the allegations fall within the DSI's purview, while Amlo will investigate the suspects' seized assets, Gen Paiboon said.

"But we want more details from the police first" before launching official probes, he said.

On Monday, police at the Metropolitan Police Bureau questioned the suspects again in the morning before taking them to the Criminal Court in the afternoon in order to ask that they be detained for 12 days until Dec 5.

The court denied a request to release the suspects on bail.

All arrested police suspects, except Pol Col Kowit, have been suspended from their posts. All are currently under disciplinary inquiry.

Asked to respond to the alleged misconduct of senior police officers, deputy Prime Minister and Defence Minister Prawit Wongsuwon said only: "Everything must comply with the law." 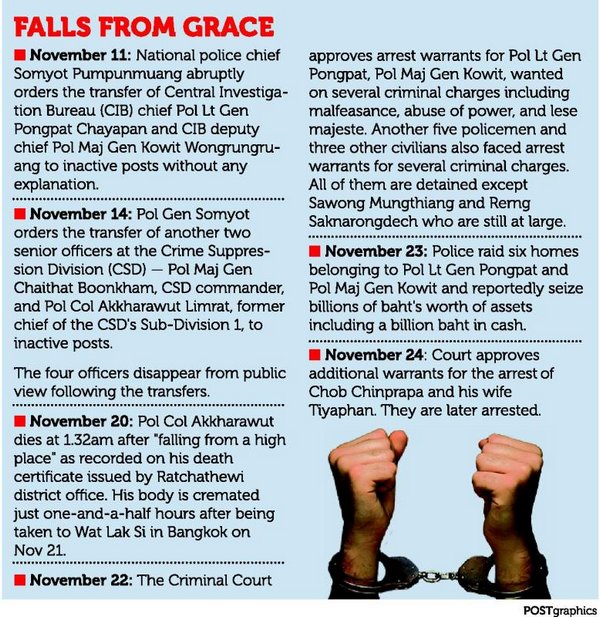