A huge fire that started at a timber warehouse in Chon Buri’s Phan Thong district around noon on Tuesday quickly spread and consumed workers’ living quarters and their possessions.

The blaze broke out about 12.10pm at an old timber warehouse at Soi Pattana 3 on Sukprayoon Road in tambon Nong Tamlueng in Phan Thong district, media reports said.

About 30 fire trucks and crews were sent to the scene to combat the fire behind Koheng Pattana recycling factory.  The flames spread quickly to engulf about five workers’ living quarters nearby, reports said.

Fire fighters finally contained the blaze. There were no early reports of injuries. Police were investigating. 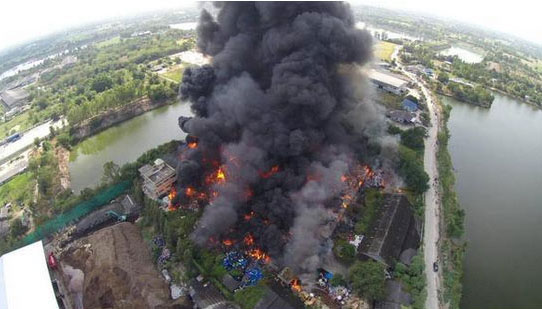