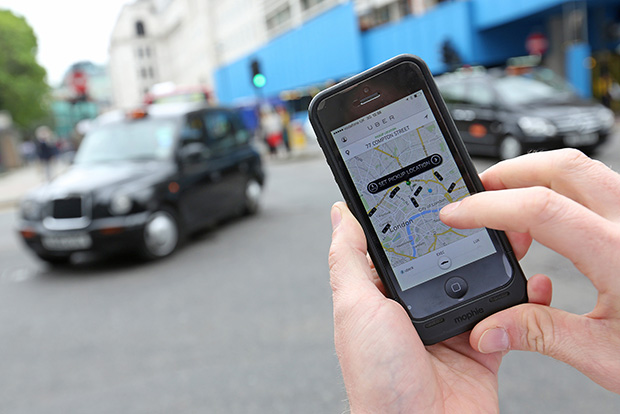 A user scans for an available vehicle using the Uber Technologies Inc's app on an Apple Inc iPhone 5 smartphone in this arranged photograph in London. The company’s Thailand ride-sharing service was said Friday to be operating illegally in Thailand and its driver will now face heavy fines. (Bloomberg photo)

The department claimed Uber vehicles are improperly registered, charge fares not in line with regulated rates, utilize drivers without the proper licenses and discriminate against customers without credit cards.

Several attempts to reach an Uber Technologies Inc spokesperson for comment were unsuccessful.

Uber - which operates the premium Uber Black limousine-like service and the discounted Uber X service, which competes directly with taxis in Bangkok and Phuket - bills itself as an on-demand transportation provider. Rides are booked through smartphone applications or the Internet and paid only via credit card.

Mr Teerapong said the firm was improperly using cars with green-lettered license plates - similar to airport limousines - and personal vehicles with black-lettered plates. Thus the drivers were using the cars in a manner contrary to that stated in their registrations. 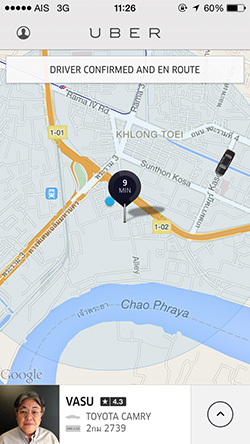 A screenshot of the Uber smartphone booking app.

He said the drivers were also illegal under the Motor Vehicle Act B.E.2522 for not charging approved rates. He further said drivers did not hold required public-transport drivers licences and were not registered in a database of public-vehicle drivers.

The department also alluded to safety fears and "hidden costs" associated with Uber cars because they are not registered in the department's database.

The department further objects to the credit card-only method of payment in Thailand, as it has concerns about transaction security.

Officials have held a meeting of different government agencies to consider how to prevent future problems that may arise from Uber services.

In the meantime, Mr Teerapong said, the Land Transport Department will encourage the public to use regular public taxis.

Now operating in more than 100 cities worldwide, Uber has come under increasing scrutiny and restrictions from governments being pressured by domestic taxi operators. Cities in Germany have outright banned the service while Uber launched its Paris service this month in defiance of a court order.

In Southeast Asia, Indonesia has raised questions over Uber's tax payments and Malaysia's Road Transport Department warned the users they would not be covered by insurance if involved in a crash. Both Indonesia and Malaysia also threatened to detain Uber drivers if they did not obtain taxi-driver licenses. Singapore, meanwhile, has announced the implementation of new rules for third-party taxi booking apps, including Uber and GrabTaxi.

In nearly every country where Uber is under pressure, taxi drivers facing new high-tech competition are the ones shouting the loudest.

In Bangkok, the recent introduction of Uber X has Bangkok cabbies up in arms, as introductory rates are lower than those charged by public taxis. The base fare is 25 baht and then 1 baht per minute and 4.5 baht per kilometre. Uber Black, which uses sedans and SUVs, charges a base fare of 45 baht plus 2.5 baht per minute and 9.2 baht per kilometre. Flat fares of 1,000 baht are available to Suvarnabhumi and Don Muang airports.

A recent survey by travel-search website GoEuro found Bangkok has the fifth-lowest Uber rates in the world.