Uber ready to 'engage with authorities'

The ride-sharing service Uber, facing a possible ban in Thailand, says it is willing to work with local authorities to improve urban transport services.

The company made the offer in a conciliatory statement issued on Saturday after the Land Transport Department warned people not to use the service.

The department cited safety as its main concern, saying some Uber vehicles and drivers were not properly registered to provide public service. The unspecified consequence of this is that if an accident occurs during such a ride, the passanger will not be covered by insurance.

As well, it said Uber's fares and credit-card payment method were not in line with the standards laid down by authorities and could pose a risk for users. 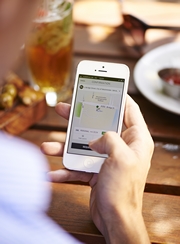 A customer requests a ride using the Uber smartphone application.

Uber responded that it offered a perfectly safe service and stressed that it would agree to abide by Thai laws.

"We respect and welcome the opportunity to engage with the relevant authorities to help them better understand the value we bring to the transportation ecosystem of Thailand," the statement said.

Uber did not say, however, whether it would continue to provide services in Thailand.

Bangkok is the latest battleground for San Francisco-based Uber Technologies Inc, which was founded just four years ago and has operations in 45 countries and more than 200 cities.

While Uber has a devoted following of consumers, it has faced fierce opposition from mainstream taxi services and has even been banned in some cities as a result of taxi industry lobbying. Taxi operators say Uber competes unfairly because it is not subject to the same stringent licensing and regulation that they face.

An Uber driver on Friday tweeted a message he claimed was sent from Uber after the ban, urging all drivers to keep serving passengers as Friday was the busiest day for taxis.

The message told Uber drivers they did not need to be concerned about the ban and that Uber would "do our best to take care of our drivers".

The Uber ban has attracted widespread criticism among online users. Most disagree with it, saying customers benefit when competition is free and fair. Some blame the inferior service of conventional taxis as the reason for their discontent.

A post by "mk" on Blognone, a blog for Thai IT profoessionals, analysed the phenomenon more systematically.

It said such conflicts were common in fledgling "sharing economies" where consumers "share" resources without having to rely on providers or middlemen. More affordable and available mobile internet access has been the major catalyst for the change.

The sharing trend understandably sparks resistance from conventional service providers, who feel threatened by their IT-based rivals, the post said.

Uber has faced bans in Belgium, Berlin and the US state of Nevada, while authorities in Seoul, Toronto, Singapore and three Australian states are attempting similar moves.

At the heart of the problem is the difference in the pace of adjustment to new technology between governments and users, the blog post said. It concluded that the trend had nothing to do with existing taxi problems which mainly stem from too-low fares.

"This has to happen sooner or later and it has nothing to do with how good or bad our taxi service is," the poster wrote.

It suggested the problem should be addressed as soon as possible by enacting new laws to accommodate the change.

Uber officially launched in Bangkok on Feb 28 this year under the Uber Black brand, providing premium private cars such as Toyota Camry and Mercedes Benz E-Class. The fare starts at 45 baht and 9.20 baht for each susequent kilometre, 40% higher than a regular taxi fare. It later launched Uber X in Bangkok, with smaller economy cars and a lower fare starting from 25 baht and one baht per minute.

Uber also has a network of freelance drivers, who have their own cars and want to earn extra income when they have free time.

The company uses a smartphone application to arrange rides between riders and drivers. Customers use the app to request rides and track their reserved vehicle's location.