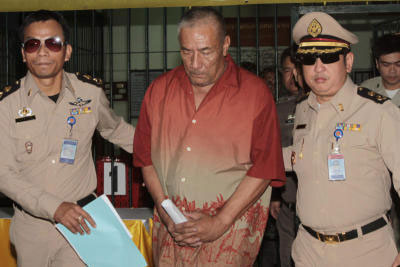 Fall from grace: Former Central Investigation Bureau chief Pongpat Chayapan is returned to the Criminal Court on Saturday after police finished questioning him. He was later ordered to be detained at the Bangkok Remand Prison.

The Personal Affairs Division of His Royal Highness Crown Prince Maha Vajiralongkorn issued the order to remove “Akkharaphongpricha” from the register of family names approved by the monarchy.

It was the last name of three suspects accused of being involved in the alleged criminal network of Pol Lt Gen Pongpat.

A family with members who have served the country or the palace may apply for a royally-approved surname under the 1915 Surnames Act. If granted, it is considered an honour for the family.

Pol Lt Gen Prawut Thawornsiri, spokesman for the Royal Thai Police and acting CIB commissioner, said on Saturday that police received a letter revoking the name and ordering the suspects to revert to using their old family name.

Their previous surname was Kerdampang, Pol Lt Gen Prawut said, adding the Interior Ministry will carry out the next steps to outlaw the now banned name.

The letter making the order, which has been widely circulated on social media, says the revocation applies to all people using the name Akkharaphongpricha, not just the suspects.

The letter, dated Friday and addressed to the permanent secretary for the Interior Ministry, was signed by ACM Satitpong Sukvimol, secretary to the Crown Prince and acting chief of the division.

Natthapol Kerdampang, Sitthisak Kerdampang and Narong Kerdampang are among five suspects arrested on Wednesday in connection with the CIB corruption probe. They are accused of citing the monarchy to obtain benefits and money, illegally collecting debts, illegally detaining people and extortion.

The same charges have been pressed against Pol Lt Gen Pongpat.

Mr Natthapol and Mr Sitthisak have been sacked from posts in the Chief of Staff's Office at the Crown Prince’s command centre, Pol Lt Gen Prawut said. Mr Natthapol was an assistant administrative officer and Mr Sitthisak was a clerk. Mr Narong was also dismissed from the Royal Household Bureau civil service.

The apprehension of the five suspects came after investigators widened their investigation following the detention of Pol Lt Gen Pongpat, several civilians and officers, including his deputy Pol Maj Gen Kowit Wongrungroj on Monday.

Police on Saturday returned Pol Lt Gen Pongpat to the Criminal Court, which earlier allowed officers to detain the suspect until Friday to investigate his assets.

Protection and Crowd Control Division deputy commander Ekkarak Limsangkat said inquiries into the suspect are complete. Police will on Thursday ask the court to detain the suspect for 12 more days, since Friday is a public holiday.

Pol Col Ekkarak said Pol Lt Gen Pongpat has not been harmed during the investigation, referring to a bandage on his right shin.

Officers attached to Bang Yai police and the Natural Resources and Environmental Crime Suppression Division searched the house of one of Pol Lt Gen Pongpat's relatives in Bang Yai district in Nonthaburi on Saturday.

Chob Chinnaprapa and his wife Piyaphan, who is Pol Lt Gen Pongpat's younger sister, were arrested on Nov 23 for alleged involvement in the criminal network. Officials discovered protected makha mong and teak wood in containers at the property. Some items were marked with a symbol used by the Royal Forest Department.

Pol Col Watcharin Phusit, a superintendent with the division, said the wood will be confiscated. Mr Chob's family must present evidence of ownership if they want to reclaim it within seven days.

Mr Chob's younger brother Sayan said his sibling put the wood in the containers four years ago. He said the wood belonged to Pol Lt Gen Pongpat, who asked his brother to keep it there.

Police unlocked two large safe boxes seized from a house belonging to Mr Chob on Thursday but found nothing inside. Three more safe boxes taken from the house of Pol Lt Gen Pongpat on Chaeng Watthana Road on Friday will be unlocked tomorrow. Police still plan to search three more locations allegedly used to store assets in the case.

Pol Col Watcharin said police also seized 2,800 sheets of makha, teak and pradoo wood worth more than seven million baht during the search of a furniture shop belonging to another suspect, Sawong Mungthiang, on Friday.

The Fine Arts Department will be asked to inspect the shop since artefacts were also found.

Sahachai “Sia Jo” Chiansoemsi is wanted on an arrest warrant for oil smuggling and is still at large.

Police Region 9 chief Montri Potranon has ordered officers in Satun, Phatthalung, Trang and Songkhla to crack down on oil smuggling, gambling dens and human trafficking, according to the regional police sources.

The oil-smuggling ring is suspected of helping to finance separatists in the far South, the sources said, adding that more than 30 high-ranking officers in the local area have been implicated in the probe.

A number have travelled to Bangkok to seek ways to defend themselves, the sources said.