Warrants out for 2 more Pongpat suspects 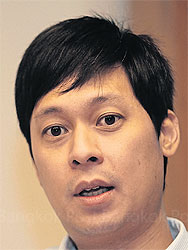 Nopporn: Wanted to flee on own jet

Mr Preecha is accused of hiring five other suspects also believed to be connected to the Pongpat network who were arrested on Nov 26.

They are accused of abducting Wittaya Panyathaweekul, a creditor of Mr Preecha and forcing him to reduce the 30 million baht debt that Mr Preecha owed him.

Mr Paichet, meanwhile, is thought to have arranged the meeting during which Mr Preecha hired the five suspects.

They are accused of citing the monarchy to obtain benefits and money from others, illegally collecting debts, forced detention, and extortion.

He is wanted by police on a slew of charges including lese majeste.

Mr Nopporn, the founder and chairman of the executive committee of Wind Energy Holding Co, allegedly hired Natthanan Thanawech, Chalach Phothirach and three other men to kidnap one of his creditors and force him to reduce the debt Mr Nopporn owed from 120 million baht to 20 million baht.

The pair also face arrest warrants for citing the monarchy to obtain benefits and money from others, illegal collection of debts, forced detention and extortion.

The three other suspects allegedly involved in this case are Mr Natthapol, Mr Narong, and Mr Chakan.

Pol Lt Gen Sriwara said police had information that Mr Nopporn entered Cambodia about 5am on Monday through the Phak Kad border checkpoint in Chanthaburi's Pong Namron district and intended to flee to a third country.

Police said the information they had was credible, but did not elaborate.

Three investigation teams have been set up to hunt Mr Nopporn, who is ranked 31st on this year's list of the country's 50 billionaires by Forbes magazine, the city police chief said.

The request was rejected because people wanted on arrest warrants are not permitted by the AoT to leave the country by plane, Mr Nirand said.

Police also want the court to approve an arrest warrant for a man identified only as Jiab. Police believe he introduced Mr Nopporn to the accused abductors and handled payments to them on Mr Nopporn's behalf.

At UN, West frustrated by slow pace with Iran

UNITED NATIONS (UNITED STATES) - The United States and European Union voiced frustration at the UN this week over the slow pace with Iran, saying its new government showed no indication it was ready to revive a nuclear accord.