A sweeping transfer of senior police officers is expected at the Crime Suppression Division and Marine Police in the wake of the Pongpat Chayapan corruption scandal. 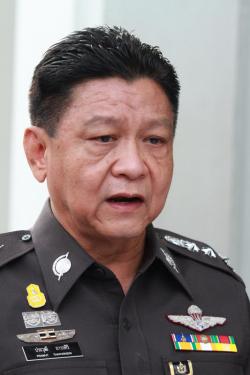 "Don't call it a purge," said Pol Lt Gen Prawut, who is also a Royal Thai Police spokesman. "It is for appropriateness … to shore up the image of the CIB. Some may or may not be involved in the [Pongpat] case. I will ensure the re-assignments are based on appropriateness and ability."

It is widely believed the targets of the shake-up will be core operational units that come under the supervision of the CIB. That includes the CSD and the Marine Police, both of which have several high-ranking officers who have been implicated in the Pongpat criminal network.

Pol Lt Gen Pongpat was chief of the CIB until he was arrested late last month, along with more than a dozen alleged associates, amid accusations he was running a massive criminal network.

National police chief Somyot Pumpunmuang has reportedly held talks with Pol Lt Gen Prawut about who should be appointed to key posts at the CIB in a bid to root out any remaining elements of the criminal organisation.

One of the suspects, Nuanrat Hengkitcharoenlert, who owns an ice factory at Talad Thai market in Pathum Thani, was apprehended after the Military Court issued a warrant for her arrest.

The other suspect, Parinya Rakwathin, managing director of the Chao Phraya Express Boat Co, turned himself in to police to face charges in connection with the corruption scandal.

Pol Lt Gen Prawut said Ms Nuanrat is accused of hiring the rogue police officers to intimidate and force a business competitor, Traisorn Theeratrakul, into giving up an ice-making concession at the market so that she could take it over.

Members of the Pongpat network alleged cited the monarchy as part of their intimidation tactics.

Metropolitan Police Bureau commissioner Srivarah Rangsipramanakul said Cdr Parinya, a former navy officer, has been implicated by other suspects as the one who introduced billionaire businessman Nopporn Suppipat, 43, to the criminal network.

Mr Nopporn, who remains at large, is accused of hiring a gang allegedly linked to the Pongpat network to kidnap a creditor and force him to reduce a debt from 120 million to 20 million baht. He also faces a lese majeste charge, though is believed to have already fled the country.

According to Pol Lt Gen Prawut, the arrest of Ms Nuanrat was the third time a court had approved warrants for a suspect who allegedly hired the Pongpat gang to intimidate business rivals.

The pair are accused of hiring the gang to abduct creditor Wittaya Panyathaweekul and forcing him to reduce their 30-million-baht debt.

The second case was the military court's approval of a warrant for the arrest of Mr Nopporn.

NAKHON SI THAMMARAT: A new Covid-19 cluster is reported at the Correctional Institution for Young Offenders in Muang district, with 64 inmates already testing positive and the number expected to soar.

SYDNEY: Australia's two most populous states are trialling facial recognition software that lets police check people are home during Covid-19 quarantine, expanding trials that have sparked controversy to the vast majority of the country's population.

US, UK, Australia to form ties amid China rise

The United States on Wednesday announced the launch of a security partnership with Britain and Australia in an apparent effort to counter China's assertiveness, paving the way for Canberra to obtain nuclear-powered submarines and join a handful of countries that operate them.