Five people have filed a lese majeste charge against a Facebook user who goes by the name "Aree RedShirt". 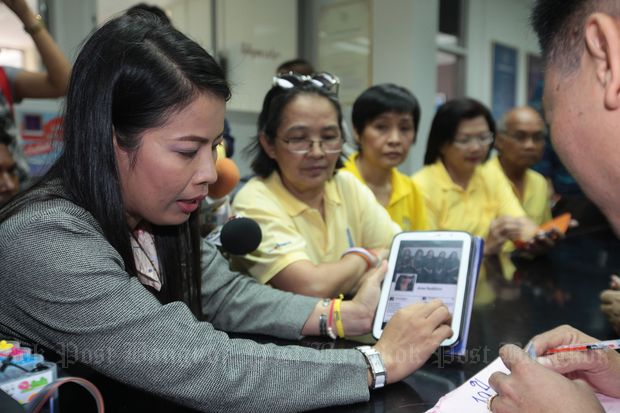 Navasornsawan Thirakotr, together with a hospital volunteer group, reported to police at Lumpini station on Monday that the user, whose real name is Aree Klubsatien, had posted Facebook messages and photos Ms Nawasornsawan found offensive on Dec 4-5. One of such photos was of her and four other women wearing black.

Ms Nawasornsawan said she did not know Mrs Aree, a nurse at a hospital in Khon Kaen, in person. But as a Thai citizen, she could not tolerate such behaviour.

Pol Capt Decha Promsuwan, chief investigator at the station, said he had accepted the complaint and would set up a panel to look into the facts.

The case will also be sent to the National Police Office, where a full panel has been set up to consider the case, Matichon Online reported.

At 1pm, officers from the Internal Security Operations Command (Isoc) invited Ms Aree for interrogation at an army camp in the northeastern province. Reporters were not allowed to take pictures there.

The hospital's management later sent Chawee Meeklaub, its lawyer, to be present at the interrogation.

Mrs Chawee said there was commotion at Ms Aree's office Monday morning, with so many hate phone calls and threats that her line had to be disconnected.

Manager also reported that apart from Mrs Aree, the Isoc officers also invited the other four persons posing with Mrs Aree in the photo she put up on her Facebook.