NAKHON PANOM – Hundreds of blocks of smuggled, compressed marijuana were seized by border police overnight on the side of the Mekong River, opposite Laos, in tambon Kham Tao of Muang district. 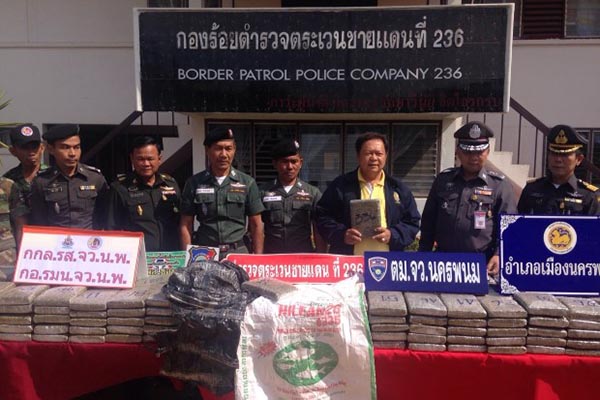 A total of 337 blocks of ganja, each about one kilogramme, were found in nine fertiliser bags on the bank of the river, provincial governor Adisak Thepart said on Tuesday.

The seizure followed information that a consignment of drugs was being smuggled across the river into Thailand.

A patrol from Border Patrol Police Company 236, headed by Pol Col Thawee Sarakarn, spotted four people in three long-tailed boats, who arrived at the riverbank, delivered the ganja and left.

Police did not move in on the smugglers because they were armed, and they wanted to avoid loss of life. The patrol then seized the drug delivery.

Mr Adisak said the ganja was smuggled from Laos for the sale in the south of Thailand. The cost at the Laos border was about 5,000 baht a kilo, but the market price would rise to 20,000 baht in the South.

Nearly one tonne of ganja has been seized in Nalhon Phanom province over the past month.