PM to visit China for inking of 4 more deals

Prime Minister Prayut Chan-o-cha will visit China on Monday to further improve ties between the two countries after they struck a long-awaited deal to develop a dual-track railway in Thailand on Friday. 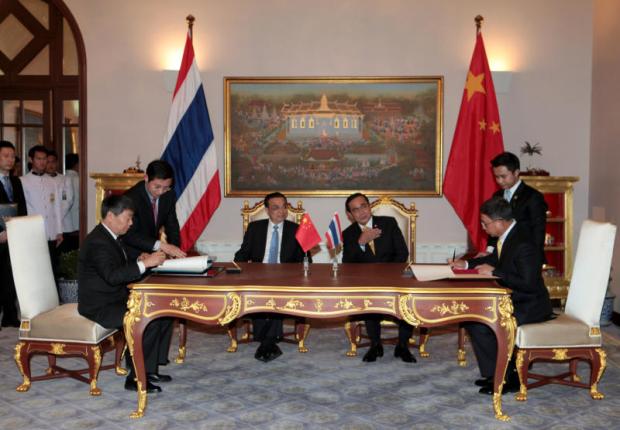 The prime minister will visit China from Monday to Tuesday and plans to take a high-speed train from Beijing to Tianjin, government spokesman Yongyuth Mayalarp said.

In China, Gen Prayut and Chinese Premier Li Keqiang will witness the signing ceremony of four agreements to foster further cooperation between the nations, including the establishment of a renminbi clearing bank in Thailand to promote the use of local currencies to facilitate bilateral trade.

Other agreements are to renew existing bilateral swap agreements for the baht and yuan, to share technologies and experiences in water resource management, and to build cooperation to promote Chinese investment in the Thai capital market.

According to a government source, Gen Prayut's visit to China is part of the two countries' efforts to double bilateral trade to US$100 billion (3.2 trillion baht) in the next two years.

In Bangkok yesterday, Gen Prayut and Mr Li witnessed the signing ceremony for the development of the dual-track railway project in Thailand.

The memorandum of understanding (MoU) on the train project was signed at Government House by Transport Minister Prajin Juntong and Xu Shaoshi, chairman of the National Development and Reform Council of Thailand.

Under the MoU, China will build the country's first standard-gauge tracks on two routes. The first route will be from Nong Khai province to the Map Ta Phut deep-sea port in Rayong province via Nakhon Ratchasima province and Kaeng Khoi district in Saraburi province. It will cover 734 kilometres.

The other line is from Kaeng Khoi station to Bangkok covering 133km.

The project will be done on a government-to-government basis.

The two countries will discuss at a later date the financial issues including the construction costs of the scheme. The source estimated the cost of the project would be about 400 billion baht.

The rail project will be the first in Thailand to use lines with 1.435 gauge tracks which enable trains to travel at up to 180 kilometres per hour and can accommodate high-speed trains up to 250kph in the future. At present, the State Railway of Thailand uses a 1-metre gauge.

Construction could start in 2016 and be completed by 2022, according to the agreement.

The two countries agreed that preparation work should start as soon as possible. ACM Prajin said earlier this month that it could begin in February next year.

Gen Prayut has said that the new system will be built for normal trains only but did not rule out a plan to bring in high-speed trains in the future. The train project is in line with Thailand's plans to improve its rail transport and become a transport hub linking Southeast Asia with China.

China plans to build another line from its southern border to Vientiane in Laos which will connect to tracks in Nong Khai.

Gen Prayut said before meeting with Mr Li that China will buy 2 million tonnes of Thai rice but did not reveal the timeframe for the purchase, only saying that it would take some time.

Chutima Bunyapraphasara, secretary-general for commerce, said half the amount will be newly harvested rice and the other half will be rice from government stockpiles. A Commerce Ministry panel will discuss with Chinese counterparts the quantity, prices and delivery of each lot of rice.