Six countries along the Mekong River have approved spending $30 billion (986 billion baht) on development projects, mainly focused on linking one another over the next 10 years. 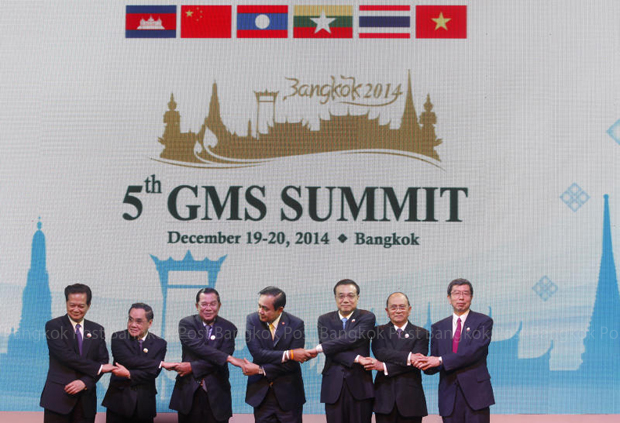 The transport projects are part of the group's vision on 3Cs — connectivity, competitiveness and community.

In addition to Thailand, the other countries under the Greater Mekong Subregion (GMS) are Cambodia, China (specifically Yunnan province and Guangxi Zhuang region), Laos, Myanmar and Vietnam. Their leaders are attending a two-day meeting ending today in Bangkok.

To strengthen the ties, seven cooperation areas will be explored.

First, joint special economic zones will be set up along member borders. For Thailand, five such zones have been established in Tak province's Mae Sot, as well as in Mukdahan, Sa Kaeo Trat and Songkhla provinces, Prime Minister Prayut Chan-o-cha, chair of the meeting, said on Saturday.

Second, two core rail links will be sped up. One will connect Sa Kaeo's Aranyaprathet and Poi Pet in Cambodia. The other will link Nong Khai in Thailand with Vientiane in Laos and Kunming in China.

"At the same time, Thailand and Myanmar are in talks to build the second bridge linking Mae Sot and Myawaddy. On the Thai-Lao side, the design for the fifth friendship bridge (Bung Kan-Paksan town of Bolikhamxai province)," Gen Prayut said.

"Thailand also proposed we add Routes No. 8 and 12 in Laos, which links with Thailand in Nakhon Phanom, in addition to Route No. 9. Cross-border bus services may also be jointly operated on the Bangkok- Savannakhet-Danang or other routes," he said.

Fifth, member countries and partner organisations should consider raising funds for the development while Thailand can help finance some projects, conduct research and mobilise some funds.

Sixth, regulations on private investment shall be reviewed and eased, possibly by mechanisms to guarantee credit for small and medium-sized enterprises, a key driver to bolstering trade.

Seventh, a Green Mekong initiative will be pursued to ensure minimal damage to the environment.

The GMS is a natural economic area along the Mekong River, covering 2.6 million square kilometres and a combined population of around 326 million.

In 1992, with assistance from Asian Development Bank, the six countries entered into a programme of economic cooperation to improve economic relations among the countries.